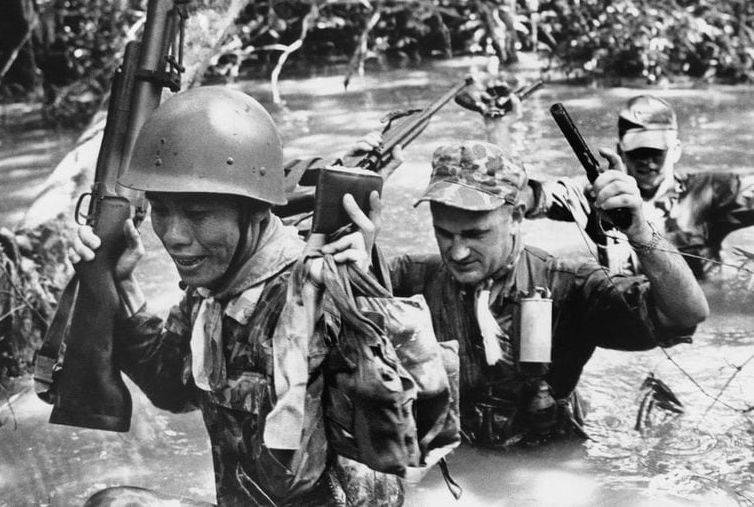 Looking for the best Vietnam War books? Browse our list to find excellent book recommendations on the subject.

Want to know what Vietnam was really like? Volume 2 is now out with 60 more stories, the same number of pages, but the stories are longer and more intense, and Volume 3 will be out this Fall. Every American should read them to learn what our Veterans went through over there. This is not just another war book.
Author(s): William F. Brown

For America1968 was the bloodiest year of the Vietnam War. For those who servedit was personal.The sights, sounds and smells of that year have stayed with me my whole life. I avoided these memories for a long time, not wanting to give them power over me again. Fifty-plus years on, I’m ready. INTO THE BELLY OF THE BEAST is my story. An ordinary boy living through extraordinary, life-changing times and coming to grips with it all.
Author(s): James D. Russell

This is a novel of the men of the 27th Infantry Regiment, the Wolfhounds. It depicts in accurate detail the daily life as a Grunt in Vietnam. It tells the story of a ill conceived mission that goes horribly wrong. It is a character driven story concentrating on the soldiers of a single squad. It shows the unrelenting brutality of war and how teenage boys barely out of high school, became men, baptised in bloody combat.
Author(s): Douglas L. Edwards

When I Turned Nineteen: A Vietnam War Memoir (2016)

It’s the year 1969. I was serving in the U.S. Army with my brothers of First Platoon Company A 3/1 11th Bde Americal (23rd Infantry) Division. We were average American sons, fathers, husbands, or brothers who’d enlisted or been drafted from all over the United States and who’d all come from different backgrounds. We came together and formed a brotherhood that will last through time.
Author(s): Glyn Haynie

The Vietnam War: An International History in Documents (2014)

“It’s a shitty war, but it’s the only one we’ve got”. Fifty years after he flew 237 missions in the backseat of the McDonnell-Douglass F-4D, Mike “Ghost” Davison offers a unique perspective of the air war in Southeast Asia. Irreverent. Profane. Funny. Tragic. Frustrating. A real behind-the-scenes look at one of the “Off Years” (Sept. ’68-Sept.
Author(s): Michael R Davison

The Vietnam War remains a topic of extraordinary interest, not least because of striking parallels between that conflict and more recent fighting in the Middle East. In The Vietnam War, Mark Atwood Lawrence draws upon the latest research in archives around the world to offer readers a superb account of a key moment in U.S. as well as global history.
Author(s): Mark Atwood Lawrence

What would you say if I told you there are disturbing things the US Government hasn’t told you about the Vietnam War and doesn’t want you to know? Things such as all the rainbow-colored pesticides and the disabling effect they had on US service personnel.Silent Spring – Deadly Autumn of the Vietnam War, is an account of war – a tale of anger and determination – a chronicle written in sorrow and hope.
Author(s): Patrick Hogan

“The best damned book from the point of view of the infantrymen who fought there.”―Army Times Among the best books ever written about men in combat, The Killing Zone tells the story of the platoon of Delta One-six, capturing what it meant to face lethal danger, to follow orders, and to search for the conviction and then the hope that this war was worth the sacrifice. The book includes a new chapter on what happened to the platoon members when they came home.
Author(s): Downs Jr., Frederick

“The enemy had a single purpose: kill me and my teammates.”Larry Chambers was still new to Vietnam in early 1969 when the LRRPs of the 101st Airborne Division became L Company, 75th (Rangers).
Author(s): Larry Chambers

There it is, and It don’t mean nothin’ are two phrases the grunts used to describe their situation in Vietnam. The first covered the insanity, and the second, the result.At the request of his daughters, Charles Hensler set out to write a brief summary of his time in Vietnam. The project evolved into a cathartic journey, resulting in a compelling, heartfelt memoir.
Author(s): Charles Peter Hensler

This monumental narrative clarifies, analyzes, and demystifies the tragic ordeal of the Vietnam war. Free of ideological bias, profound in its undertsanding, and compassionate in its human portrayls , it is filled with fresh revelations drawn from secret documents and from exclusive interviews with participants-French, American, Vietnamese, Chinese: diplomats, military commanders, high government officials, journalists, nurses, workers, and soldiers.
Author(s): Stanley Karnow

We highly recommend you to buy all paper or e-books in a legal way, for example, on Amazon. But sometimes it might be a need to dig deeper beyond the shiny book cover. Before making a purchase, you can visit resources like Library Genesis and download some vietnam war books mentioned below at your own risk. Once again, we do not host any illegal or copyrighted files, but simply give our visitors a choice and hope they will make a wise decision.

The Devil's Trick: How Canada Fought the Vietnam War

A Short History of the Vietnam War

Clear, Hold, and Destroy: Pacification in Phú Yên and the American War in Vietnam

Please note that this booklist is not absolute. Some books are really hot items according to Los Angeles Times, others are written by unknown writers. On top of that, you can always find additional tutorials and courses on Coursera, Udemy or edX, for example. Are there any other relevant resources you could recommend? Drop a comment if you have any feedback on the list.