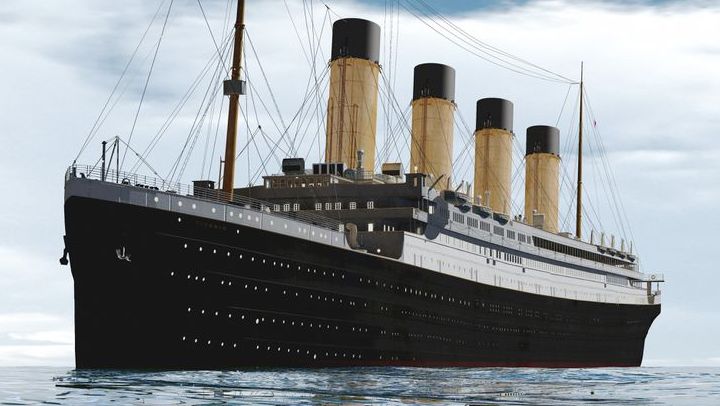 Looking for the best Titanic books? Browse our list to find excellent book recommendations on the subject.

The Story of Titanic for Children: Astonishing Little-Known Facts and Details About the Most Famous Ship in the World (2018) More than a century after it crashed into an iceberg, the Titanic remains as compelling as ever. Now children can explore its beautiful sundecks, marvel at the luxurious design, and relive the tragic sinking of the world’s most famous ship. Rich in visual detail, this insightful look at the unfolding disaster will hold kids spellbound with intriguing facts and real-life stories.
Author(s): Joe Fullman Reissued for Spring 2012 to coincide with the anniversary of the sinking of the TITANIC in April 1912.Here is the one book with all of the answers to your questions about the TITANIC! This is the heart-stopping story about the legendary ship–from the building,maiden voyage, and tragic sinking, to its high-tech discovery on the ocean floor.
Author(s): Hugh Brewster , Laurie Coulter , et al.

Shadow of the Titanic: The Extraordinary Stories of Those Who Survived (2013)

We think we know the story of the Titanic—the once majestic and supposedly unsinkable ship that struck an iceberg on its maiden voyage from Britain to America—but very little has been written about the vessel’s 705 survivors. How did the events of that horrific night in the icy waters of the North Atlantic affect the lives of those who lived to tell the tale?
Author(s): Andrew Wilson Thanks to the gift of a ticket from his uncle, a young Jesuit named Francis Browne traveled on the Titanic during her maiden voyage from Southampton, to Cherbourg to Cork. A keen photographer, Fr Browne took many unique photographsof the ship and her passengers. Invited to remain with the ship as it crossedthe Atlantic, Fr Browne was saved from possible disaster by a telegram from his Jesuit superior ordering him to “”””get off that ship””””.
Author(s): E. E. O’Donnell

*Includes dozens of pictures *Describes the construction of the Titanic, life aboard the ship during its maiden voyage, the sinking of the ship, rescue efforts, and the discovery and exploration of the wreck *Includes accounts written by passengers, crew members, White Star Line officials, and explorers of the wreck *Includes a bibliography for further reading “I cannot imagine any condition which would cause a ship…
Author(s): Charles River Editors Alice Carver is traveling aboard the incredible Titanic with her mother to make a new home in the United States. Meanwhile, William Alexander III is aboard the ship as part of a vacation with his wealthy family. Readers (Ages 7-9) wil explore the many features of the Titanic with these characters as they meet and search for fun aboard the ship.
Author(s): Josh Gregory, Sebastia Serra

Titanic 1912: The original news reporting of the sinking of the Titanic (2012)

The original 1912 news accounts of the Titanic disaster include the first-hand accounts of survivors as told to reporters who met the ship bringing them from where they were saved from lifeboats.The surviving crew describes the crucial moments after the ship hit the iceberg.
Author(s): Ken Rossignol

Paperback Publisher: SPHERE (1982) ASIN: B000S7XXRW Shipping Information: View shipping rates and policies Average Customer Review: 4.6 out of 5 stars 557 customer reviews Would you like to tell us about a lower price? If you are a seller for this product, would you like to suggest updates through seller support?
Author(s): Jan 1, 1982

A century apart, NUMA Director Dirk Pitt and detective Isaac Bell team up to unlock the truth about the most famous maritime disaster of all time.In the present day, Pitt makes a daring rescue from inside an antiquated submersible in the waters off New York City.
Author(s): Clive Cussler, Du Brul, Jack At 2:20 a.m. on April 15, 1912, the Royal Mail Steamer Titanic, the largest passenger steamship of this time, met its catastrophic end after crashing into an iceberg. Of the 2,240 passengers and crew onboard, only 705 survived. More than 100 years later, today’s readers will be intrigued by the mystery that surrounds this ship that was originally labeled “unsinkable.”
Author(s): Stephanie Sabol , Who HQ, et al.

We highly recommend you to buy all paper or e-books in a legal way, for example, on Amazon. But sometimes it might be a need to dig deeper beyond the shiny book cover. Before making a purchase, you can visit resources like Library Genesis and download some titanic books mentioned below at your own risk. Once again, we do not host any illegal or copyrighted files, but simply give our visitors a choice and hope they will make a wise decision.

Sinkable: Obsession, the Deep Sea, and the Shipwreck of the Titanic

Into the Deep: A Memoir From the Man Who Found Titanic

Please note that this booklist is not definite. Some books are really chart-busters according to Washington Post, others are written by unknown authors. On top of that, you can always find additional tutorials and courses on Coursera, Udemy or edX, for example. Are there any other relevant links you could recommend? Leave a comment if you have any feedback on the list.