Below I’ll give you my selections for the best Taoism books by a few categories. I will cover these and other great books more in depth later.

For the first time, the great depth and diversity of Taoist spirituality is introduced in a single, accessible manual. Taoism, known widely today through the teachings of the classic Tao Te Ching and the practices of t’ai chi and feng-shui, is less known for its unique traditions of meditation, physical training, magical practice, and internal alchemy. Covering all of the most important texts, figures, and events, this essential guide illuminates Taoism’s extraordinarily rich history and remarkable variety of practice. A comprehensive bibliography for further study completes this…
Author(s): Eva Wong

Place the word Tao Into your heart. Use no other words. The Tao is constantly moving, the path that all life and the whole universe takes. There is nothing that is not part of it—harmonious living is to know and to move with the Tao—it is a way of life, the natural order of things, a force that flows through all life.365 Tao is a contemporary book of meditations on what it means to be wholly a part of the Taoist way, and thus to be completely in harmony with oneself and the surrounding world.Deng Ming-Dao is the author of eight books, including The Living I Ching, Chronicles of Tao,…
Author(s): Ming-Dao Deng

The Tao Teh King (Tao Te Ching) forms the fundamental core of modern Taoist philosophy and has informed the beliefs and mode of life of the people of China for 2500 years. For all those who seek peace, contentment, harmony and balance in life, the Tao Teh King is an indispensable resource. Lao Tse’s words speak directly to the heart with simple, direct and profound wisdom addressing the core principles of the art of living well. The translation and commentary presented here was completed between 1921 and 1923 and serialized in the periodical…
Author(s): Lao Tzu

Drawing on ancient and modern sources, Watts treats the Chinese philosophy of Tao in much the same way as he did Zen Buddhism in his classic The Way of Zen. Critics agree that this last work stands as a perfect monument to the life and literature of Alan Watts….
Author(s): Alan Watts , Lee Chih-chang, et al.

Tao has been built into the foundation of East Asian culture for millennia, and many books have been written to explain it. But Tao cannot fully be explained in words; it can only felt and experienced. Tao is something you live, day by day, moment by moment. It’s the omnipresent oneness beyond ephemeral phenomena that expresses itself in everything.New York Times bestselling author Ilchi Lee, an enlightened Tao master from South Korea, has laid out a path to living Tao everyday. Along this path, he guides you to an understanding of the meaning of birth, death,…
Author(s): Ilchi Lee 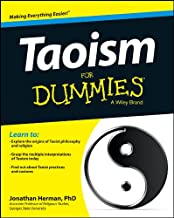 Lao Tzu’s Tao Te Ching is the second most translated book in the world, and the practice of religious Taoism is on the rise in China, where adherents currently number in the hundreds of millions. Yet there remains a remarkable lack of reliable information about Taoism for curious westerners. Taoism For Dummies provides comprehensive coverage of Taoism’s origins in China’s Chou Dynasty, its underlying quietist principles, its emergence as a major religion, various interpretation of its core texts, including both Eastern and Western interpretations, key Taoist concepts, and much more. It also provides a…
Author(s): Jonathan Herman

Taoism For Beginners: The Philosophy Of A Happy Life Taoism teaches the basic principles of living a long and healthy life. The Taoist principles help us understand the inseparable nature of the self and the nature of the cosmos, to participate in the natural flow of events. To gain knowledge about Taoism is the cultivation of a thought process of growth, self-exploration, transformation, and to link our inner self with the surrounding world. This is the way to engage ourselves in the realm of the Tao. What are the implications of Taoism in our…
Author(s): Jordan Jacobs

8. The Tao of Daily Life: The Mysteries of the Orient Revealed The Joys of Inner Harmony Found The Path to Enlightenment Illuminated (2007) 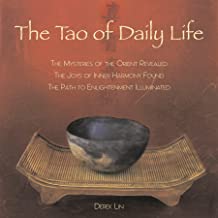 The perfect book for readers who are interested in Taoism and want a little daily inspiration. The Tao of Daily Life combines ancient Eastern wisdom with practical application-perfect for busy Western readers! Derek Lin, Taoist master and expert in Eastern philosophy, brings his deep knowledge of this time-honored Chinese spiritual thought system into the twenty-first century. “There is one simple reason for the Tao to have survived through the ages intact: it works,” writes Lin. “The principles of the Tao are extremely effective when applied to…
Author(s): Derek Lin

9. Sufism and Taoism: A Comparative Study of Key Philosophical Concepts (2016)

In this deeply learned work, Toshihiko Izutsu compares the metaphysical and mystical thought-systems of Sufism and Taoism and discovers that, although historically unrelated, the two share features and patterns which prove fruitful for a transhistorical dialogue. His original and suggestive approach opens new doors in the study of comparative philosophy and mysticism.Izutsu begins with Ibn ‘Arabi, analyzing and isolating the major ontological concepts of this most challenging of Islamic thinkers. Then, in the second part of the book, Izutsu…
Author(s): Toshihiko Izutsu

Five hundred years before the birth of Jesus, a God-realized being named Lao-tzu in ancient China dictated 81 verses, which are regarded by many as the ultimate commentary on the nature of our existence. The classic text of these 81 verses, called the Tao Te Ching or the Great Way, offers advice and guidance that is balanced, moral, spiritual, and always concerned with working for the good.In this book, Dr. Wayne W. Dyer has reviewed hundreds of translations of the Tao Te Ching and has written 81 distinct essays on how to apply the ancient wisdom of Lao-tzu to today’s modern world. This…
Author(s): Dr. Wayne W. Dyer

11. Nourishing the Essence of Life: The Outer, Inner, and Secret Teachings of Taoism (2004)

The teachings of Taoism, China’s great wisdom tradition, apply to every aspect of life, from the physical to the spiritual—and include instruction on everything from lifestyle (a life of simplicity and moderation is best) to the work of inner alchemy that is said to lead to longevity and immortality. Here, Eva Wong presents and explains three classic texts on understanding the Tao in the macrocosm of the universe and the microcosm of the body that provide an excellent overview of the three traditional levels of the Taoist teachings—Outer, Inner, and Secret. The Outer…
Author(s): Eva Wong

The best-selling Rumi book ever is now better than ever! This revised and expanded edition of the comprehensive one-volume edition of America′s most popular poet includes a new introduction by Coleman Barks, and 57 new poems never published before. The ecstatic, spiritual poetry of Rumi is more popular than ever, and The Essential Rumi continues to be far and away the top-selling title of all Rumi books. With the addition of many new poems and a new introduction, The Essential Rumi is now clearly the definitive, and most delightful selection of…
Author(s): Jalal al-Din Rumi, Coleman Barks, et al.

is the 2,500 years old source to Taoism, written by the legendary Taoist philosopher Lao Tzu. In 81 short chapters, he presented the world according to Tao, the Way, and how mankind should adapt to it. The book has become one of the foremost world classics of wisdom – maybe even more relevant today than it was to Lao Tzu’s contemporaries.This translation of the text focuses on the clarity and simplicity by which Lao Tzu expressed his fascinating cosmology and profound ethics. Each chapter is thoroughly explained in its ancient Chinese context, also regarding how this old wisdom can be understood and applied today….
Author(s): Stefan Stenudd

14. No Self, No Problem: How Neuropsychology Is Catching Up to Buddhism (2019)

While in grad school in the early 1990s, Chris Niebauer began to notice striking parallels between the latest discoveries in psychology, neuroscience, and the teachings of Buddhism, Taoism, and other schools of Eastern thought. When he presented his findings to a professor, his ideas were quickly dismissed as “pure coincidence, nothing more.” Fast-forward 20 years later and Niebauer is a PhD and a tenured professor, and the Buddhist-neuroscience connection he found as a student is practically its own genre in the bookstore. But according to Niebauer, we are just beginning to understand the link…
Author(s): Niebauer PhD, Chris

Best Taoism Books Worth Your Attention

We highly recommend you to buy all paper or e-books in a legal way, for example, on Amazon. But sometimes it might be a need to dig deeper beyond the shiny book cover. Before making a purchase, you can visit resources like Genesis and download some taoism books mentioned below at your own risk. Once again, we do not host any illegal or copyrighted files, but simply give our visitors a choice and hope they will make a wise decision.

Edgar Cayce and the Secret of the Golden Flower: Ancient Taoism Way to Your True Self

Taoism and Self Knowledge: The Chart for the Cultivation of Perfection (Xiuzhen Tu)

Chinese Alchemy: Taoism, the Power of Gold, and the Quest for Immortality

Please note that this booklist is not definite. Some books are truly record-breakers according to USA Today, others are drafted by unknown authors. On top of that, you can always find additional tutorials and courses on Coursera, Udemy or edX, for example. Are there any other relevant books you could recommend? Leave a comment if you have any feedback on the list.