Skip to content
BLGM's mission is to promote a love of books and reading to all by offering advice and information needed to help our visitors to find their next favorite book. We regularly create and post so-called listicles (also known as booklists) on various mostly tech-related topics.
Home » Reviews
Author BLGMReading 9 minViews 315Published by January 27, 2019

Below I’ll give you my selections for the best Politics books by a few categories. I will cover these and other great books more in depth later.

1. The Righteous Mind: Why Good People Are Divided by Politics and Religion (2013)

Drawing on his twenty five years of groundbreaking research on moral psychology, Haidt shows how moral judgments arise not from reason but from gut feelings. He shows why liberals, conservatives, and libertarians have such different intuitions about right and wrong, and he shows why each side is actually right about many of its central concerns. In this subtle yet accessible book, Haidt gives you the key to understanding the miracle of human cooperation, as well as the curse of our eternal divisions and conflicts. If you’re ready to trade in anger for understanding,…
Author(s): Jonathan Haidt

One of the fundamental works of Western political thought, Aristotle’s masterwork is the first systematic treatise on the science of politics. For almost three decades, Carnes Lord’s justly acclaimed translation has served as the standard English edition. Widely regarded as the most faithful to both the original Greek and Aristotle’s distinctive style, it is also written in clear, contemporary English. This new edition of the Politics retains and adds to Lord’s already extensive notes, clarifying the flow of Aristotle’s argument and identifying literary and historical references. A glossary defines…
Author(s): Aristotle, Carnes Lord

Jobs, health care, energy, civil literties, and more more are on the ballot again. In a world of sound bites, deliberate misinformation, and a political scene colored by the blue versus red partisan divide, how does the average educated American find a reliable source that’s free of political spin? What You Should Know About Politics . . . But Don’t breaks it all down, issue by issue, explaining who stands for what, and why—whether it’s the economy, income inequality, Obamacare, foreign policy, education, immigration, or climate change. If you’re a…
Author(s): Jessamyn Conrad, Naomi Wolf 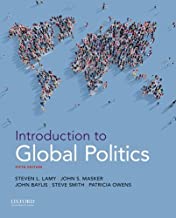 5. The Politics of Promotion: How High-Achieving Women Get Ahead and Stay Ahead (2019)

The scenario is all too familiar: a qualiﬁed, motivated professional woman does everything she can think of to secure a coveted promotion. After years of investing her time and energy in the company, she is ready to advance. Later, she is shocked and dismayed to ﬁnd that, not only was she passed over, but the successful candidate had fewer qualiﬁcations and little to no familiarity with the practical side of the business. What happened?The Politics of Promotion focuses on the single most important—and most frequently neglected—ingredient of advancement in the professional world. Many ambitious women were taught that they…
Author(s): Bonnie Marcus

Equip your students to excel in the new AP course and on the exam….
Author(s): David Wolfford 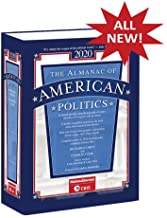 The 2020 Almanac of American Politics remains the gold standard of accessible political information, relied on by everyone involved, invested or interested in politics in America. Highly regarded for its in-depth analysis and comprehensive profiles of every congressional district, state, governor and member of Congress, The Almanac is the tool you need to better understand the context of the people and perspectives shaping the issues that matter to you.The Almanac of American Politics is the must have resource for understanding the American political…
Author(s): Columbia Books Inc 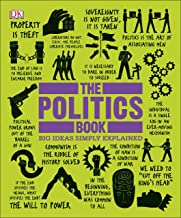 From ancient and medieval philosophers such as Confucius and Thomas Aquinas, to revolutionary thought leaders such as Thomas Jefferson and Leon Trotsky, to the voices who have shaped modern politics today — Mao Zedong, Malcolm X, Che Guevara, and more — The Politics Book clearly and simply explains more than 100 groundbreaking ideas in the history of political thought. With easy-to-follow graphics, succinct quotations, and accessible text, The Politics Book is an essential reference for students and anyone wondering how politics works….
Author(s): DK

What would happen to international politics if the dead rose from the grave and started to eat the living? Daniel Drezner’s groundbreaking book answers the question that other international relations scholars have been too scared to ask. Addressing timely issues with analytical bite, Drezner looks at how well-known theories from international relations might be applied to a war with zombies. Exploring the plots of popular zombie films, songs, and books, Theories of International Politics and Zombies predicts realistic scenarios for the political stage in…
Author(s): Daniel W. Drezner 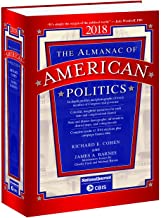 The 2018 Almanac of American Politics remains the gold standard of accessible political information, relied on by everyone involved, invested or interested in politics in America. Highly regarded for its in-depth analysis and comprehensive profiles of every congressional district, state, governor and member of Congress, The Almanac is the tool you need to better understand the context of the people and perspectives shaping the issues that matter to you.The Almanac of American Politics is the must have resource for understanding the American political landscape. The 2018 edition includes: Essential reference and…
Author(s): Columbia Books Inc

11. The Politics of Resentment: Rural Consciousness in Wisconsin and the Rise of Scott Walker (Chicago Studies in American Politics) (2016)

Since the election of Scott Walker, Wisconsin has been seen as ground zero for debates about the appropriate role of government in the wake of the Great Recession. In a time of rising inequality, Walker not only survived a bitterly contested recall that brought thousands of protesters to Capitol Square, he was subsequently reelected. How could this happen? How is it that the very people who stand to benefit from strong government services not only vote against the candidates who support those services but are vehemently against the very idea of big government? With The Politics of Resentment, Katherine J. Cramer uncovers…
Author(s): Katherine J. J. Cramer 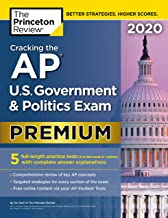 Techniques That Actually Work.• Tried-and-true strategies to help you avoid traps and beat the test• Tips for pacing yourself and guessing logically• Essential tactics to help you work smarter, not harderEverything You Need to Know to Help Achieve a High Score.• Up-to-date information on the 2020 AP U.S. Government & Politics Exam• Content review for all test topics, with a quick-reference glossary for the most important dates, cases, and information• Online access to handy study guides, printable resources, helpful pre-college…
Author(s): The Princeton Review 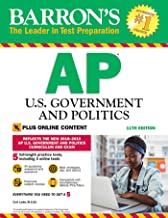 This book has been completely rewritten to reflect the new AP U.S. Government and Politics curriculum and exam that will be implemented in the 2018-2019 school year. Advanced Placement students will appreciate the in-depth preparation they will get in this must-have manual that includes two full-length model AP U.S. Government and Politics exams with answer keys and explanations; extensive subject review of the branches of federal government, political parties, and more; updated content including required Supreme Court decisions, required foundational documents and the impact of the 2016 Presidential election. Students who…
Author(s): Lader M.S. Ed., Curt

Best Politics Books You Should Read

We highly recommend you to buy all paper or e-books in a legal way, for example, on Amazon. But sometimes it might be a need to dig deeper beyond the shiny book cover. Before making a purchase, you can visit resources like Genesis and download some politics books mentioned below at your own risk. Once again, we do not host any illegal or copyrighted files, but simply give our visitors a choice and hope they will make a wise decision.

From Main Street to Mall The Rise and Fall of the American Department Store (American Business, Politics, and Society)

Dying of Whiteness: How the Politics of Racial Resentment Is Killing America’s Heartland

Please note that this booklist is not errorless. Some books are absolutely best-sellers according to Chicago Tribune, others are composed by unknown writers. On top of that, you can always find additional tutorials and courses on Coursera, Udemy or edX, for example. Are there any other relevant books you could recommend? Leave a comment if you have any feedback on the list.