Skip to content
BLGM's mission is to promote a love of books and reading to all by offering advice and information needed to help our visitors to find their next favorite book. We regularly create and post so-called listicles (also known as booklists) on various mostly tech-related topics.
Home » Reviews
Author BLGMReading 8 minViews 691Published by February 20, 2018

Looking for the best Nihilism books? Browse our list to find excellent book recommendations on the subject. 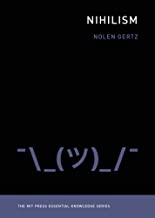 When someone is labeled a nihilist, it’s not usually meant as a compliment. Most of us associate nihilism with destructiveness and violence. Nihilism means, literally, “an ideology of nothing. “ Is nihilism, then, believing in nothing? Or is it the belief that life is nothing? Or the belief that the beliefs we have amount to nothing? If we can learn to recognize the many varieties of nihilism, Nolen Gertz writes, then we can learn to distinguish what is meaningful from what is meaningless. In this addition to the MIT Press Essential Knowledge series, Gertz traces…
Author(s): Nolen Gertz

2. Nihilism: A Philosophy Based In Nothingness And Eternity (2016)

Most people see the world in binary categories. They believe that there is either an inherent moral good that we must all obey, or there are no rules and life is pointless anarchy. Nihilism argues for a middle path: we lack inherent order, but are defined by our choices, which means that we must start making smarter choices by understanding the reality in which we live more than the human social reality which we have used to replace it in our minds. A work of philosophy in the continental tradition, Nihilism examines the human relationship with philosophical…
Author(s): Brett Stevens

Beyond Good and Evil: Prelude to a Philosophy of the Future is a book by philosopher Friedrich Nietzsche, first published in 1886. It draws on and expands the ideas of his previous work, Thus Spoke Zarathustra, but with a more critical and polemical approach. In Beyond Good and Evil, Nietzsche accuses past philosophers of lacking critical sense and blindly accepting dogmatic premises in their consideration of morality. Specifically, he accuses them of founding grand metaphysical systems upon the faith that the good man is the opposite of the evil man, rather…
Author(s): Friedrich Nietzsche

In Ontological Terror Calvin L. Warren intervenes in Afro-pessimism, Heideggerian metaphysics, and black humanist philosophy by positing that the "Negro question" is intimately imbricated with questions of Being. Warren uses the figure of the antebellum free black as a philosophical paradigm for thinking through the tensions between blackness and Being. He illustrates how blacks embody a metaphysical nothing. This nothingness serves as a destabilizing presence and force as well as that which whiteness defines itself against. Thus, the function of blackness as giving…
Author(s): Calvin L. Warren

5. Nothing & Everything: How to stop fearing nihilism and embrace the void (2017)

What is masculinity? Ask ten men and you’ll get ten vague, conflicting answers. Unlike any book of its kind, The Way of Men offers a simple, straightforward answer-without getting bogged down in religion, morality, or politics. It’s a guide for understanding who men have been and the challenges men face today. The Way of Men captures the silent, stifling rage of men everywhere who find themselves at odds with the over-regulated, over-civilized, politically correct modern world. If you’ve ever closed your eyes and wished for one day as a lion, this book is…
Author(s): Jack Donovan

Heidegger, Marcuse, and Ellul warned against the rise of a technological mass culture. Philosophy of technology has since turned away from such dystopic views, promoting instead the view that we shape technologies just as technologies shape us. Yet the rise of Big Data has exceeded our worst fears about Big Brother, leading us to again question whether technologies are empowering us or enslaving us. Rather than engage in endless debates about whether technologies are making us better or making us worse, Nolen Gertz investigates what we think “better” and “worse” mean, and what role this…
Author(s): Nolen Gertz

In this inspiring and humorous book, John C. Parkin suggests that saying F**k It is the perfect Western expression of the Eastern spiritual ideas of letting go, giving up, and finding real freedom by realizing that things don’t matter so much (if at all). It’s a spiritual way that doesn’t require chanting, meditating, or wearing sandals. And it’s the very power of this profanity that makes it perfect for shaking us Westerners out of the stress and anxiety that dominate our daily lives. With the help of this book, people around…
Author(s): John C. Parkin

Explores the concept of nihilism and argues that it need not imply despair, but can be responded to positively.Disputing the common misconception that nihilism is wholly negative and necessarily damaging to the human spirit, John Marmysz offers a clear and complete definition to argue that it is compatible, and indeed preferably responded to, with an attitude of good humor. He carefully scrutinizes the phenomenon of nihilism as it appears in the works, lives, and actions of key figures in the history of philosophy, literature, politics, and theology, including Nietzsche, Heidegger,…
Author(s): John Marmysz

A continuation and finalization of the author’s prior writings in “An Existential Meta-Ethics” arguing that nihilism is a sound and the only existential morality in Technological Society. In these essays, the author argues a nihilist epistemology and ontology including a contemplation of the nihilist God. After rejecting suicide to make a leap to morality, the author argues that the only serious philosophical question remaining is the nihilist’s relationship to God….
Author(s): Valeriano Diviacchi

Through surprisingly good storytelling, David “Don’t Call Me Doctor” Landers takes us on a captivating spiritual adventure as he walks us through his personal evolution from dedicated Christian to devout atheist. But much more than autobiography, his story is woven with provocative psychological and philosophical commentary, including input from the likes of Lucretius, Freud, and the metal band Napalm Death. A rare style of intellectual but conversational and poignant but humorous makes for a highly accessible and enjoyable read. As the spiritual account winds down, the book transitions into a more rational…
Author(s): Landers Ph.D., David

Best Nihilism Books That Will Hook You

We highly recommend you to buy all paper or e-books in a legal way, for example, on Amazon. But sometimes it might be a need to dig deeper beyond the shiny book cover. Before making a purchase, you can visit resources like Genesis and download some nihilism books mentioned below at your own risk. Once again, we do not host any illegal or copyrighted files, but simply give our visitors a choice and hope they will make a wise decision.

Sad by Design: On Platform Nihilism

Please note that this booklist is not absolute. Some books are truly hot items according to USA Today, others are composed by unknown authors. On top of that, you can always find additional tutorials and courses on Coursera, Udemy or edX, for example. Are there any other relevant books you could recommend? Leave a comment if you have any feedback on the list.