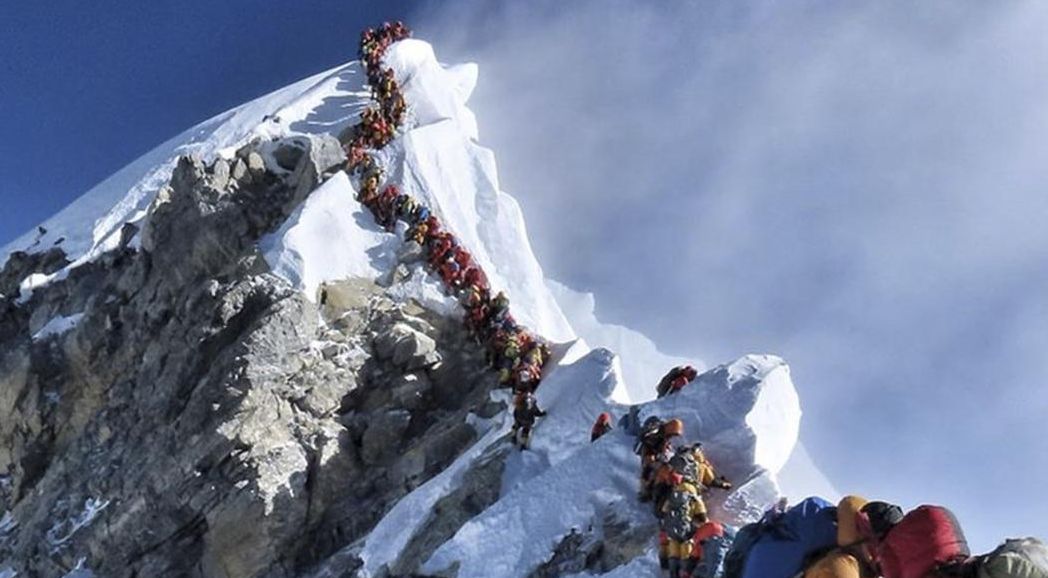 Our list of some of the best Mount Everest books & series in recent years. Get inspired by one or more of the following books.

Into Thin Air: A Personal Account of the Mt. Everest Disaster (1999)

A bank of clouds was assembling on the not-so-distant horizon, but journalist-mountaineer Jon Krakauer, standing on the summit of Mt. Everest, saw nothing that “suggested that a murderous storm was bearing down.” He was wrong.
Author(s): Jon Krakauer , Randy Rackliff, et al.

As the recent deaths of sixteen Sherpas underscore, climbing Mount Everest remains a daunting challenge. Located in the Himalayas, Everest is the highest mountain in the world at a whopping 29,028 feet. In this compelling narrative, Nico Medina guides readers through the mountain’s ancient beginnings, first human settlers, historic climbs, and the modern commercialization of mountain-climbing.
Author(s): Nico Medina , Who HQ, et al.

The Boy Who Conquered Everest: The Jordan Romero Story (2010)

Jordan Romero was a regular 9 year old boy. He loved BMX biking, listening to music, hanging out with his friends and family, and studying nature and reptiles. Then one day Jordan spotted a map of the tallest mountains on Earth’s seven continents, including massive Mt. Everest–the tallest of all. Jordan could not take his eyes off of that map; his head was filled with thoughts of snow-covered peaks, jagged rocks, billowing white clouds and deep blue skies.
Author(s): Katherine Blanc, Jordan Romero

Life and Death on Mt. Everest: Sherpas and Himalayan Mountaineering (2001)

The Sherpas were dead, two more victims of an attempt to scale Mt. Everest. Members of a French climbing expedition, sensitive perhaps about leaving the bodies where they could not be recovered, rolled them off a steep mountain face. One body, however, crashed to a stop near Sherpas on a separate expedition far below. They stared at the frozen corpse, stunned.
Author(s): Sherry B. Ortner

The peak of Mount Everest is the highest place on Earth—and one of the deadliest. Terrible storms stop climbers in their tracks! Avalanches tumble down! Brave adventurers disappear on the snowy slopes. Then Edmund Hillary and Tenzing Norgay decide to climb. They come from different cultures, but their dream is the same. Can teamwork help them make it to the roof of the world?
Author(s): Gail Herman, Michele Amatrula

Former Navy air rescue swimmer Brian Dickinson was roughly 1,000 feet from the summit of Mount Everest―also known as “the death zone”―when his Sherpa became ill and had to turn back, leaving Brian with a difficult decision: Should he continue to push for the summit or head back down the mountain? After carefully weighing the options, Brian decided to continue toward the summit―alone. Four hours later, Brian solo summited the highest peak in the world. But the celebration was short lived.
Author(s): Brian Dickinson

The Top of the World: Climbing Mount Everest (2002)

In this stunning picture book, Steve Jenkins takes us to Mount Everest – exploring its history, geography, climate, and culture. This unique book takes readers on the ultimate adventure of climbing the great mountain. Travel along and learn what to pack for such a trek and the hardships one may suffer on the way to the top.
Author(s): Steve Jenkins

A true story, warts and all, of what really happened to ad exec and amateur climber Kevin Flynn during his days at the top of the world. In May 2004, Flynn reached the summit of Mt. Everest–but not without tears, laughter, failures, near-death experiences and great friendships. If you’sve ever wondered what it would be like for a mere mortal to attempt Mt. Everest, this book is as close as it gets.
Author(s): Flynn Kevin, Fallesen Gary

Because It’s There: To Climb Mount Everest: Join the adventure of self-discovery through humor and personal insights. (2019)

Because It’s There: To Climb Mount Everest is a memoir of Aleksey Berzon. The story is about a young man who attempted to climb Mount Everest. However, before the journey could begin, it seemed to be doomed from the start. Visa law changes, a hurricane and airplane cancellations stood in the way between Aleksey and his adventure. Experience Nepal and climb to Mount Everest through the eyes of Aleksey.
Author(s): Aleksey Berzon

Four kids. One mountain.They come from all across America to be the youngest kid ever to climb Everest. But only one will reach the top first. The competition is fierce. The preparation is intense. The challenge is breathtaking. When the final four reach the higher peaks, disaster strikes-and all that separates the living from the dead is chance, bravery, and action.
Author(s): Gordon Korman

On May 10 and 11, 1996, eight climbers perished in what remains the worst disaster in Everest’s history. Following the tragedy, numerous accounts were published, with Jon Krakauer’s Into Thin Air becoming an international bestseller—but the whole story has not been told. This book reveals for the first time the full, startling facts that led to the tragedy.
Author(s): Graham Ratcliffe

We highly recommend you to buy all paper or e-books in a legal way, for example, on Amazon. But sometimes it might be a need to dig deeper beyond the shiny book cover. Before making a purchase, you can visit resources like Library Genesis and download some mount everest books mentioned below at your own risk. Once again, we do not host any illegal or copyrighted files, but simply give our visitors a choice and hope they will make a wise decision.

Everest 1922: The Epic Story of the First Attempt on the World's Highest Mountain

Everest 1922: The Epic Story of the First Attempt on the World’s Highest Mountain

A Mountain to Climb: The Climate Crisis: A Summit Beyond Everest

Please note that this booklist is not final. Some books are really best-sellers according to Chicago Tribune, others are written by unknown writers. On top of that, you can always find additional tutorials and courses on Coursera, Udemy or edX, for example. Are there any other relevant resources you could recommend? Drop a comment if you have any feedback on the list.