Looking for the best Lovecraftian books? Browse our list to find excellent book recommendations on the subject.

This third collection, like the previous two, contains the most novel and cutting-edge scholarship in Lovecraftiana, taking familiar topics down unfamiliar paths, amply demonstrating that H. P. Lovecraft's work has more resonance in modern culture than ever before. All in all, a bumper crop of criticism and anaysis that will appeal to academics and Lovecraft's most erudite fans alike! Lovecraftian Proceedings is the Official Organ of the Dr. Henry Armitage Memorial  Symposium.  Established in 2013 as a key part of NecronomiCon…
Author(s): Sean Moreland, Elena Tchougounova-Paulson, et al.

2. What October Brings: A Lovecraftian Celebration of Halloween (2018)

Halloween, a time for laughing children in white bedsheets and superhero costumes. A time for chocolate candy, and pumpkins, and Trick-or-Treat. … a time for dark things everywhere to slink out of the shadows and into our lives, reminding those unlucky few that our charades of Halloween cannot erase the centuries of history and pain behind the facade…What October Brings celebrates the dark traditions of the autumn rituals, of Halloween and Samhain, in homage to the uniquely fascinating fiction of HP Lovecraft. Masters of the short story offer you a “once in a…
Author(s): Brian M. Sammons, John Shirley, et al.

3. Cthulhu Lies Dreaming: Twenty-three Tales of the Weird and Cosmic (2016)

The classic American horror author H. P. Lovecraft coined the term weird fiction in the 1920s. Even today, in our rational world of wonder, his legacy of cosmic horror slumbers on. Deep in the recesses of our unconscious minds, we suspect its truth – that as we puzzle out the shape of true reality, we’ll find it is not to our liking. Not one bit. Modern science, with its experts and specialties, is a fragmentary thing. In this, it reflects the human mind. We keep our thoughts in boxes, broken into digestible shards. It is safer. Cosmic horror warns us that…
Author(s): Salomé Jones , Peter Rawlik , et al.

4. The Coming of the Old Ones: A trio of Lovecraftian Stories (The Jeffrey Thomas Chapbook Series) (2019)

Three stories of horror in the vein of H. P. Lovecraft’s Cthulhu Mythos. AROUND THE CORNER – A man whose parents raised him in a cult suspects the new tenants in his apartment complex belong to a similar cult, and are summoning up powers that will change the world…and not for the betterment of humankind. AFTER THE FALL – Around the world, after a great storm the sky becomes filled with the remains of vast fossilized monsters locked in an ancient conflict, leaving humans to interpret this vision and to consider their own humble existence….
Author(s): Jeffrey Thomas

CITY OF LIVING SHADOWS presents unearthly fantasy and horror tales of the Cthulhu Mythos, crawling with Lovecraftian creatures. Most of these adventures have only been available so far on Kindle. This paperback collection is a companion volume to HORRORS & ABOMINATIONS: 24 Tales Of The Cthulhu Mythos and THE HOUSE OF THE OCELOT & More Lovecraftian Nightmares. In the title story, “City Of Living Shadows,” a glowing flower in a solarium holds the key to a horrific onslaught of night-gaunts from the Dreamlands. Can the reason behind their attack be determined before they destroy even more of…
Author(s): Mark McLaughlin, Sheehan Jr., Michael

Collected here for the first time are nine terrifying tales of cosmic horror, including the World Fantasy Award-nominated novella “The Imago Sequence,” the International Horror Guild Award-nominated “Proboscis,” and the never-before-published “Procession of the Black Sloth.” Together, these stories, each a masterstroke of craft and imaginative irony, form a shocking cycle of distorted evolution, encroaching chaos, and ravenous insectoid hive-minds hidden just beneath the seemingly benign surface of the Earth. With colorful…
Author(s): Laird Barron 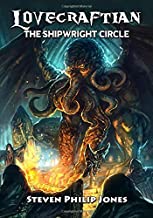 Inspired by the master of macabre horror, H.P. Lovecraft, and sure to entertain the legion of fans of the author! Lovecraftian weaves classic H. P. Lovecraft characters such as Herbert West and Randolph Carter and weird tales like “The Call of Cthulhu” and “The Colour Out of Space” into a new single universe modern narrative. The first novel in this series introduces The Shipwright Circle, a gaggle of scholarly and creative friends at the Miskatonic University in legend-haunted Arkham, Massachusetts. Here brilliant but neurotic research student…
Author(s): Steven Philip Jones , Trey Baldwin, et al.

8. Something Other: A Collection of Horror Stories (2019)

Shadowy hints of titanic monsters.Humanesque voices, even faces, that almost seem real.Lures into ancient and incomprehensible jaws. The twisting of human minds and bodies for insidious purposes.Biological corruption and chaos. Encounters with the unknown.All the above and more are found in this collection of 19 horror stories and 3 unnerving poems. Inspired by the works of HP Lovecraft and Thomas Ligotti, Romines draws from the natural world, the Internet, and a dark imagination to create a variety of frightening tales, populated with a menagerie of original and wholly disquieting…
Author(s): Jacob Romines

A hilarious, shocking, terrifying thrill-ride across the American landscape, The Damned Highway combines two great flavors of weird: the gonzo journalism of Hunter S. Thompson and the uncanny terrors of H.P. Lovecraft! Horror legend Brian Keene and cult storytelling master Nick Matamas dredge up a tale of drug-fueled eldritch madness from the blackest depths of the American Nightmare. On a freaked-out bus journey to Arkham, Massachusetts and the 1972 Presidential primary, evidence mounts that sinister forces are on the rise, led by the Cult of…
Author(s): Nick Mamatas , Brian Keene , et al.

Warning: You may have a huge, invisible spider living in your skull. THIS IS NOT A METAPHOR. You will dismiss this as ridiculous fear-mongering. Dismissing things as ridiculous fear-mongering is, in fact, the first symptom of parasitic spider infection — the creature stimulates skepticism, in order to prevent you from seeking a cure. That’s just as well, since the “cure” involves learning what a chainsaw tastes like. You can’t feel the spider, because it controls your nerve endings. You won’t even feel it when it breeds. And it will breed. Just stay calm, and…
Author(s): David Wong

Alex watches from her bedroom window as the small, secluded town of Amberton sleeps: a bright, pleasant town with a dark, disturbing secret. Helen, her foster mother, is gone all hours of the night with no explanation. The neighbors, always friendly, always smiling, are also always watching. They know something Alex doesn’t. Something she shouldn’t… When three outsiders become ensnared in the town’s dark conspiracies, Alex witnesses for herself the nightmare hiding in plain sight. Together, haunted by their own pasts, these outsiders threaten to unstitch the town at its rotten seams,…
Author(s): Abe Moss

Best friends in small-town New Hampshire, Jon and Chloe share an intense, near-mystical bond. But before Jon can declare his love for his soul mate, he is kidnapped, and his plans for a normal life are permanently dashed. Four years later, Jon reappears. He is different now: bigger, stronger, and with no memory of the time he was gone. Jon wants to pick up where he and Chloe left off—until the horrifying instant he realizes he possesses strange powers that pose a grave threat to everyone he cares for. Afraid of hurting Chloe, Jon runs away, embarking on a journey for…
Author(s): Caroline Kepnes

You should not have touched this book with your bare hands.NO, don’t put it down. It’s too late. They’re watching you.My name is David Wong. My best friend is John. Those names are fake. You might want to change yours.You may not want to know about the things you’ll read on these pages, about , about , about the invasion, and the future. But it’s too late. You touched the book. You’re in the game. You’re under .The only defense is knowledge. You need to read this book, to the end. Even the part with the bratwurst. Why? You just have to trust me. The drug is called and it gives users a window into another…
Author(s): David Wong

Autistic scientist Yasira Shien has developed a radical new energy drive that could change the future of humanity. But when she activates it, reality warps, destroying the space station and everyone aboard. The AI Gods who rule the galaxy declare her work heretical, and Yasira is abducted by their agents. Instead of simply executing her, they offer mercy – if she’ll help them hunt down a bigger target: her own mysterious, vanished mentor. With her homeworld’s fate in the balance, Yasira must choose who to trust: the gods and their ruthless post-human angels, or the rebel scientist whose…
Author(s): Ada Hoffmann

We highly recommend you to buy all paper or e-books in a legal way, for example, on Amazon. But sometimes it might be a need to dig deeper beyond the shiny book cover. Before making a purchase, you can visit resources like Genesis and download some lovecraftian books mentioned below at your own risk. Once again, we do not host any illegal or copyrighted files, but simply give our visitors a choice and hope they will make a wise decision.

The Lovecraftian Poe: essays on influence, reception, interpretation, and transformation

S. Petersen’s Field Guide to Lovecraftian Horrors: A Field Observer’s Handbook of Preternatural Entities and Beings from Beyond The Wall of Sleep

Dead But Dreaming: The Great Old Ones of Lovecraftian Legend Reinterpreted as Atlantean Kings

Please note that this booklist is not final. Some books are absolutely chart-busters according to Los Angeles Times, others are drafted by unknown authors. On top of that, you can always find additional tutorials and courses on Coursera, Udemy or edX, for example. Are there any other relevant books you could recommend? Leave a comment if you have any feedback on the list.