Skip to content
📚 Book Lovin' Geek Mamas are on a mission to promote a love of books and reading to everyone. We help our visitors to find their next favorite book. Our authors regularly create and post so-called listicles (also known as booklists) on various mostly tech-related topics.
Home » Reviews
Author BLGMReading 6 minViews 815Published by June 7, 2017

Our list of some of the best Jonestown books & series in recent years. Get inspired by one or more of the following books.

The Road to Jonestown: Jim Jones and Peoples Temple (2018)

“A thoroughly readable, thoroughly chilling account of a brilliant con man and his all-too vulnerable prey” (The Boston Globe)—the definitive story of preacher Jim Jones, who was responsible for the Jonestown Massacre, the largest murder-suicide in American history, by the New York Times bestselling author of Manson.In the 1950s, a young Indianapolis minister named Jim Jones preached a curious blend of the gospel and Marxism.
Author(s): Jeff Guinn

A Thousand Lives: The Untold Story of Jonestown (2012)

opened a church in Indianapolis called Peoples Temple Full Gospel Church. He was a charismatic preacher with idealistic beliefs, and he quickly filled his pews with an audience eager to hear his sermons on social justice. As Jones’s behavior became erratic and his message more ominous, his followers leaned on each other to recapture the sense of equality that had drawn them to his church. But even as the congregation thrived, Jones made it increasingly difficult for members to leave.
Author(s): Julia Scheeres

Seductive Poison: A Jonestown Survivor’s Story of Life and Death in the Peoples Temple (1999)

A high-level member of Jim Jones’s Peoples Temple for seven years, Deborah Layton escaped his infamous commune in the Guyanese jungle, leaving behind her mother, her older brother, and many friends. She returned to the United States with warnings of impending disaster, but her pleas for help fell on skeptical ears, and shortly thereafter, in November 1978, the Jonestown massacre shocked the world.
Author(s): Deborah Layton

Salvation and Suicide: An Interpretation of Jim Jones, the Peoples Temple, and Jonestown (Religion in North America) (2003)

Praise for the first edition:”[This] ambitious and courageous book [is a] benchmark of theology by which questions about the meaningful history of the Peoples Temple may be measured.” ―Journal of the American Academy of ReligionRe-issued in recognition of the 25th anniversary of the mass suicides at Jonestown, this revised edition of David Chidester’s pathbreaking book features a new prologue that considers the meaning of the tragedy for a post-Waco, post-9/11 world.
Author(s): David Chidester

Raven: The Untold Story of the Rev. Jim Jones and His People (2008)

Tim Reiterman’s Raven provides the seminal history of the Rev. Jim Jones, the Peoples Temple, and the murderous ordeal at Jonestown in 1978. This PEN Award–winning work explores the ideals-gone-wrong, the intrigue, and the grim realities behind the Peoples Temple and its implosion in the jungle of South America.
Author(s): Tim Reiterman

Jackie Speier was twenty-eight when she joined Congressman Leo Ryan’s delegation to rescue defectors from cult leader Jim Jones’s Peoples Temple in Jonestown, Guyana. Ryan was killed on the airstrip tarmac. Jackie was shot five times at point-blank range. While recovering from what would become one of the most harrowing tragedies in recent history, Jackie had to choose: Would she become a victim or a fighter?
Author(s): Jackie Speier

Laura Johnston Kohl was a teen activist working to integrate public facilities in the Washington, D.C., area. She actively fought for civil rights and free speech, and against the Vietnam War throughout the 1960s. After trying to effect change single-handedly, she found she needed more hands. She joined Peoples Temple in 1970, living and working in the progressive religious movement in both California and Guyana.
Author(s): Laura Johnston Kohl 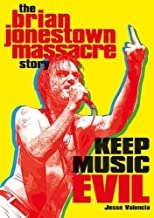 The Brian Jonestown Massacre are probably best known for their leader Anton Newcombe’s incendiary persona, as captured in the controversial 2004 rockumentary Dig! – which won the Grand Jury Prize at Sundance  – but what isn’t known is the truth behind the making of the film, or the true story of the band since their formation in early 1990s San Francisco. Until now.
Author(s): Jesse Valencia

Julia and her adopted brother, David, are sixteen-years-old. Julia is white. David is black. It is the mid-1980s and their family has just moved to rural Indiana, a landscape of cottonwood trees, trailer parks, and an all-encompassing racism. At home are a distant mother—more involved with her church’s missionaries than her own children—and a violent father.
Author(s): Julia Scheeres

Slavery of Faith: The untold story of the Peoples Temple from the eyes of a thirteen year old, her escape from Jonestown at 20 and life 30 years later. (2009)

Slavery Of Faiththe quietly kept story of a young woman’s escape through the jungles of Jonestown, Guyana the morning of the massacre November 18, 1978 and her struggles to live in the aftermath. November 18, 2008 marks 30 years since the Jonestown, Guyana Massacre/Suicides and the death of its founder, the Reverend Jim Jones.
Author(s): Leslie Wagner-Wilson

We highly recommend you to buy all paper or e-books in a legal way, for example, on Amazon. But sometimes it might be a need to dig deeper beyond the shiny book cover. Before making a purchase, you can visit resources like Library Genesis and download some jonestown books mentioned below at your own risk. Once again, we do not host any illegal or copyrighted files, but simply give our visitors a choice and hope they will make a wise decision.

inTOXICating FOLLOWERSHIP: in the Jonestown Massacre

Hearing the Voices of Jonestown: Putting a Human Face on an American Tragedy

Please note that this booklist is not final. Some books are truly chart-busters according to The Wall Street Journal, others are composed by unknown authors. On top of that, you can always find additional tutorials and courses on Coursera, Udemy or edX, for example. Are there any other relevant links you could recommend? Drop a comment if you have any feedback on the list.