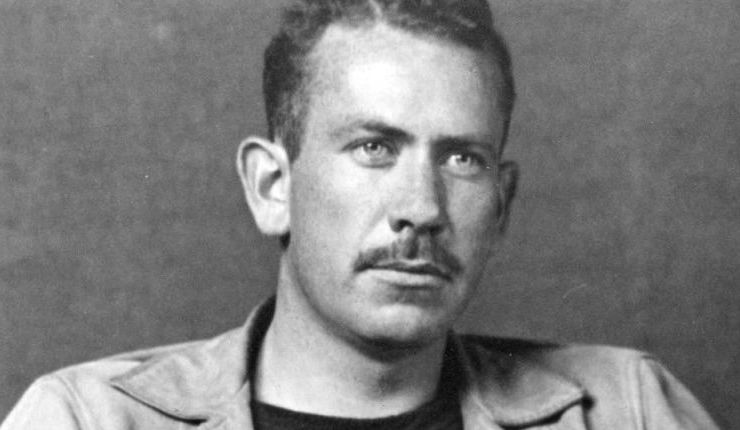 Until you’ve consumed all of the best John Steinbeck books, can you even claim to be a true fan?

Collected here for the first time in a deluxe paperback volume are six of John Steinbeck’s most widely read and beloved novels.
Author(s): John Steinbeck

Travels with Charley in Search of America (1980)

To hear the speech of the real America, to smell the grass and the trees, to see the colors and the light—these were John Steinbeck’s goals as he set out, at the age of fifty-eight, to rediscover the country he had been writing about for so many years. With Charley, his French poodle, Steinbeck drives the interstates and the country roads, dines with truckers, encounters bears at Yellowstone and old friends in San Francisco.
Author(s): John Steinbeck

In his journal, Nobel Prize winner John Steinbeck called East of Eden “the first book,” and indeed it has the primordial power and simplicity of myth.
Author(s): John Steinbeck, David Wyatt

Forced from their home, the Joad family is lured to California to find work; instead they find disillusionment, exploitation, and hunger.
Author(s): Steinbeck, John; With an introduction Demott, Robert

In the two years after the 1939 publication of Steinbeck’s masterful , Steinbeck and his novel increasingly became the center of intense controversy and censorship.
Author(s): John Steinbeck, Richard Astro

Unburdened by the material necessities of the more fortunate, the denizens of discover rewards unknown in more traditional society. Henry the painter sorts through junk lots for pieces of wood to incorporate into the boat he is building, while the girls from Dora Flood’s bordello venture out now and then to enjoy a bit of sunshine.
Author(s): John Steinbeck

The Winter of Our Discontent (Penguin Classics) (2008)

In awarding John Steinbeck the 1962 Nobel Prize in Literature, the Nobel committee stated that with The Winter of Our Discontent, he had “resumed his position as an independent expounder of the truth, with an unbiased instinct for what is genuinely American.” Ethan Allen Hawley, the protagonist of Steinbeck’s last novel, works as a clerk in a grocery store that his family once owned.
Author(s): John Steinbeck, Susan Shillinglaw

Ancient pagan beliefs, the great Greek epics, and the Bible all inform this extraordinary novel by Nobel Prize winner John Steinbeck, which occupied him for more than five difficult years. While fulfilling his dead father’s dream of creating a prosperous farm in California, Joseph Wayne comes to believe that a magnificent tree on the farm embodies his father’s spirit.
Author(s): John Steinbeck, Robert DeMott

In this masterful tale set in Norway during World War II, Steinbeck explores the effects of invasion on both the conquered and the conquerors.
Author(s): John Steinbeck, Donald V. Coers

In Monterey, on the California coast, Sweet Thursday is what they call the day after Lousy Wednesday, which is one of those days that are just naturally bad.
Author(s): John Steinbeck, Robert DeMott

Written at a time of profound anxiety caused by the illness of his mother, Nobel Prize winner John Steinbeck draws on his memories of childhood in these stories about a boy who embodies both the rebellious spirit and the contradictory desire for acceptance of early adolescence. Unlike most coming-of-age stories, the cycle does not end with a hero “matured” by circumstances. As John Seelye writes in his introduction, reversing common interpretations, is imbued with a sense of loss.
Author(s): John Steinbeck, John Seelye

We highly recommend you to buy all paper or e-books in a legal way, for example, on Amazon. But sometimes it might be a need to dig deeper beyond the shiny book cover. Before making a purchase, you can visit resources like Library Genesis and download some john steinbeck books mentioned below at your own risk. Once again, we do not host any illegal or copyrighted files, but simply give our visitors a choice and hope they will make a wise decision.

Mad at the World: A Life of John Steinbeck

On the road to The Grapes of Wrath

Please note that this booklist is not final. Some books are truly chart-busters according to The Wall Street Journal, others are composed by unknown authors. On top of that, you can always find additional tutorials and courses on Coursera, Udemy or edX, for example. Are there any other relevant links you could recommend? Drop a comment if you have any feedback on the list.