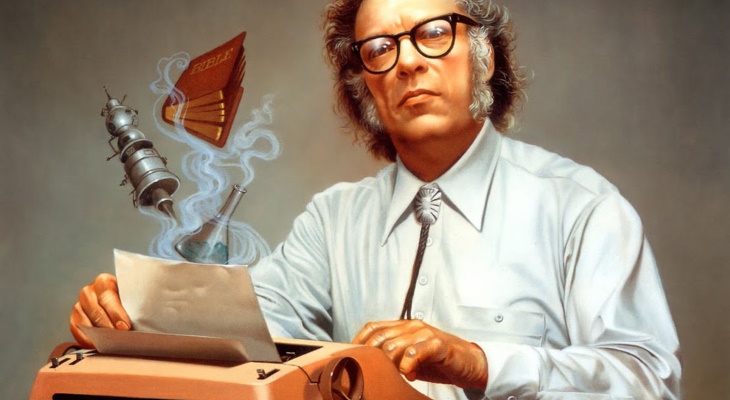 Our list of some of the best Isaac Asimov books & series in recent years. Get inspired by one or more of the following books.

I, Robot, the first and most widely read book in Asimov’s Robot series, forever changed the world’s perception of artificial intelligence. Here are stories of robots gone mad, of mind-reading robots, and robots with a sense of humor.
Author(s): Isaac Asimov

One of Isaac Asimov’s SF masterpieces, this stand-alone novel is a monument of the flowering of SF in the 20th century. It is widely regarded as Asimov’s single best SF novel and one every SF fan should read.Andrew Harlan is an Eternal, a member of the elite of the future.
Author(s): Isaac Asimov

The Complete Stories of Isaac Asimov (1994)

First published fifteen years ago, shortly after his death, inside this collection are some of the finest short stories of science fiction writing from one of the genre’s greatest writers, Isaac Asimov. Isaac Asimov was the Grand Master of the Science Fiction Writers of America, the founder of robot ethics, and one of the world’s most prolific authors of fiction and non-fiction.
Author(s): Isaac Asimov

For twelve thousand years the Galactic Empire has ruled supreme. Now it is dying. Only Hari Seldon, creator of the revolutionary science of psychohistory, can see into the future—a dark age of ignorance, barbarism, and warfare that will last thirty thousand years.
Author(s): Isaac Asimov

The first book of the definitive three-volume collection of short stories by the prolific Isaac Asimov, whose tales have delighted countless fans for over half a century–a must for every science fiction bookshelf.
Author(s): Isaac Asimov

Led by its founding father, the great psychohistorian Hari Seldon, and taking advantage of its superior science and technology, the Foundation has survived the greed and barbarism of its neighboring warrior-planets. Yet now it must face the Empire—still the mightiest force in the Galaxy even in its death throes.
Author(s): Isaac Asimov

s Foundation novels chronicle the struggle of a courageous group of men and women dedicated to preserving humanity s light in a galaxy plunged into a nightmare of ignorance and violence thirty thousand years long. After years of struggle, the Foundation lies in ruins—destroyed by the mutant mind power of the Mule.
Author(s): Isaac Asimov

It is the year 12,020 G.E. and Emperor Cleon I sits uneasily on the Imperial throne of Trantor. Here in the great multidomed capital of the Galactic Empire, forty billion people have created a civilization of unimaginable technological and cultural complexity. Yet Cleon knows there are those who would see him fall—those whom he would destroy if only he could read the future. Hari Seldon has come to Trantor to deliver his paper on psychohistory, his remarkable theory of prediction.
Author(s): Isaac Asimov

In the twenty-second century Earth obtains limitless, free energy from a source science little understands: an exchange between Earth and a parallel universe, using a process devised by the aliens. But even free energy has a price.
Author(s): Isaac Asimov

In a career spanning nearly fifty years, Isaac Asimov—science writer, historian, and futurist—accurately predicted how technological breakthroughs would be developed and utilized, years before they became reality. His foresight envisioned calculators, computerized cars, and advances in the field of robotics.
Author(s): Isaac Asimov

Best Isaac Asimov Books that Should be on Your Bookshelf

We highly recommend you to buy all paper or e-books in a legal way, for example, on Amazon. But sometimes it might be a need to dig deeper beyond the shiny book cover. Before making a purchase, you can visit resources like Library Genesis and download some isaac asimov books mentioned below at your own risk. Once again, we do not host any illegal or copyrighted files, but simply give our visitors a choice and hope they will make a wise decision.

Nightfall and Other Stories

Please note that this booklist is not errorless. Some books are really best-sellers according to Washington Post, others are composed by unknown writers. On top of that, you can always find additional tutorials and courses on Coursera, Udemy or edX, for example. Are there any other relevant resources you could recommend? Leave a comment if you have any feedback on the list.