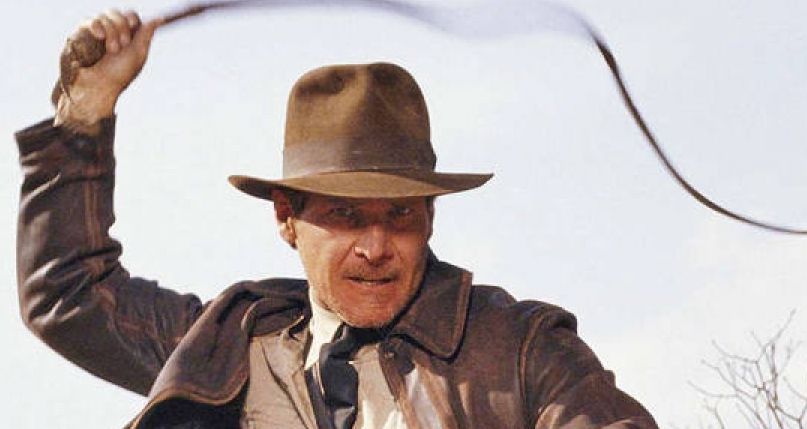 Until you’ve consumed all of the best Indiana Jones books, can you even claim to be a true fan?

The Adventures of Indiana Jones (2008)

The Grail Diary: Indiana Jones and the Last Crusade (2018)

This book is a detailed replica of the original Grail Diary as created by Henry Jones as seen in the 1989 movie Indiana Jones and the Last Crusade. Every page has been painstakingly researched and recreated in high-quality crisp graphics using a genuine prop which was used for filming as a reference to make this an exact replica. The book contains every drawing, every text and every illustration as seen in the movie as well as original invented material.
Author(s): Replica Books

There’s no rest for the weary treasure hunter, but that’s how Indiana Jones likes it. Fresh from spying for the Allies in the thick of World War II Germany, the globe-trotting archaeologist doesn’t need much persuading to join his cohort “Mac” McHale in searching for one of the most coveted of artifacts: the fabled black pearl known as the Heart of Darkness. But the partners in adventure are not alone on their foray into the mysterious jungles of Haiti.
Author(s): Steve Perry, Craig Howell

The Complete Making of Indiana Jones: The Definitive Story Behind All Four Films (2008)

From Raiders of the Lost Ark to The Kingdom of the Crystal SkullThe man with the hat is back–in the definitive behind-the-scenes look at the Indiana Jones epic action saga.When George Lucas and Steven Spielberg put their heads together to create a no-holds-barred action-adventure movie, bigger-than-life hero Indiana Jones was born. The rest is breathtaking, record-breaking box-office history.
Author(s): J.W. Rinzler, Laurent Bouzereau

Indiana Jones and the Kingdom of the Crystal Skull (TM) (2008)

"The name is Jones. Indiana Jones."He’s back. Everyone’s favorite globe-trotting, tomb-raiding, wisecracking archaeologist is finally at it again. Now it’s 1957, the atomic age is in full swing, and McCarthy-era paranoia has the nation on edge. But for Indiana Jones, the Cold War really heats up when his latest expedition is crashed by a ruthless squad of Russian soldiers.
Author(s): James Rollins

The time is 1935. Through a series of misadventures in Shanghai—and a narrow escape from death—Indiana Jones finds himself in a remote village in India. A mysterious old shaman tells him that his arrival has been foreseen—and that he and his companions are destined to save the villagers.So begins the most daring, dark, and dangerous quest of Indiana Jones’s career.
Author(s): James Kahn

Indiana Jones and the Raiders of the Lost Ark (2008)

Indiana Jones and the Philosopher’s Stone (1995)

For centuries the lust for wealth and immortality has driven men mad. Now Indiana Jones is called to London to recover an ancient alchemist’s manuscript rumored to contain the formula both for turning lead into gold and granting its owner eternal life.
Author(s): Max McCoy

Indiana Jones is back in this massive volume recounting three of the most important discoveries in the career of the twentieth century’s most adventurous archeologist! Containing the long out-of-print stories, “Indiana Jones and the Fate of Atlantis,” “Thunder in the Orient,” and “Indiana Jones and the Arms of Gold,” this substantial tome follows the intrepid Dr.
Author(s): Dan Barry

Indiana Jones and the Last Crusade (2008)

The time is the 1930s.Indiana Jones has never had a problem finding trouble, but now he has landed in the deadliest situation imaginable. He must rescue his father, eminent professor Dr. Henry Jones, from the Nazis’ clutches to keep them from discovering secrets only Dr. Jones possesses—secrets that could reveal the location of the Holy Grail.The perilous race is on to save his father and recover the most extraordinary relic of all time—and to prevent the Nazis and Dr.
Author(s): Rob Macgregor

Indiana Jones and the Secret of the Sphinx (1999)

It is the most coveted of all ancient artifacts. In it is written the history—and the fate—of every human being. And he who owns it writes his own destiny. Now Indiana Jones follows a trail of danger, magic, and archaeological mystery through the war-torn Orient, from Rangoon to the Egyptian desert, searching for the secret underground hiding place of the all-powerful Omega Book.
Author(s): Max McCoy

When sixteenth-century stone carvings of animals start to go missing from museums across the globe, authorities think it’s a simple case of burglary. But Indiana Jones and Marcus Brody think otherwise. Legend has it that the statues serve as a key to finding a mysterious ruby, which is said to make its bearer invincible. It’s up to Indy to find the statues and the ruby before it falls into the wrong hands!
Author(s): Mark Evanier, Ethen Beavers

This is a replica of the prop used in the movie. Every page has been painstakingly recreated to match the original and has been printed using premium quality paper and materials entirely made in North America. The softcover is not real leather although it is printed to look like a leather journal. There are no inserts in this journal, only the printed pages of the diary, any inserts will need to be created or purchased separately.
Author(s): Henry Jones

For sixteen centuries the Order of Pythia has awaited the reappearance of the ancient oracle of sacred knowledge at Delphi. An earthquake, rending the earth beneath the ruins, has now heralded her return. Dorian Belecamus, a beautiful and bewitching archaeology professor, sees an opportunity to do more than dig into the past: this is her chance to seize control of her country’s future—by becoming the Oracle of Delphi!
Author(s): Rob MacGregor

Indiana Jones And The Temple Of Doom – KALI MAAAAAA

We highly recommend you to buy all paper or e-books in a legal way, for example, on Amazon. But sometimes it might be a need to dig deeper beyond the shiny book cover. Before making a purchase, you can visit resources like Library Genesis and download some indiana jones books mentioned below at your own risk. Once again, we do not host any illegal or copyrighted files, but simply give our visitors a choice and hope they will make a wise decision.

LIFE Indiana Jones: Raiders of the Lost Ark at 40

The Métis of Senegal: Urban Life and Politics in French West Africa

Please note that this booklist is not absolute. Some books are really chart-busters according to USA Today, others are composed by unknown authors. On top of that, you can always find additional tutorials and courses on Coursera, Udemy or edX, for example. Are there any other relevant resources you could recommend? Leave a comment if you have any feedback on the list.