Until you’ve consumed all of the best Holocaust books, can you even claim to be a true fan?

In June 1944, Freda Wineman and her family arrived at Auschwitz-Birkenau, the infamous Nazi concentration and death camp. After a cursory look from an SS doctor, Freda’s life was spared and her mother was sent to the gas chambers. Freda only survived because the Allies won the war–the Nazis ultimately wanted every Jew to die.
Author(s): Laurence Rees

“Superbly written and researched, synthesizing the classics while digging deep into a vast repository of primary sources.” ―Josef Joffe, Wall Street JournalWhy? explores one of the most tragic events in human history by addressing eight of the most commonly asked questions about the Holocaust: Why the Jews? Why the Germans? Why murder? Why this swift and sweeping? Why didn’t more Jews fight back more often?
Author(s): Peter Hayes

Survivors: True Stories of Children in the Holocaust (2005)

Gripping and inspiring, these true stories of bravery, terror, and hope chronicle nine different children’s experiences during the Holocaust.These are the true-life accounts of nine Jewish boys and girls whose lives spiraled into danger and fear as the Holocaust overtook Europe. In a time of great horror, these children each found a way to make it through the nightmare of war.
Author(s): Allan Zullo

Olga Lengyel tells, frankly and without compromise, one of the most horrifying stories of all time. This true, documented chronicle is the intimate, day-to-day record of a beautiful woman who survived the nightmare of Auschwitz and Birchenau. This book is a necessary reminder of one of the ugliest chapters in the history of human civilization. It was a shocking experience. It is a shocking book.
Author(s): Olga Lengyel

While growing up in New York, Marilyn Shimon often visited her uncle in California. She saw his scars, gaped at his “31321” tattoo, and listened to his horrific stories of the Holocaust. However, she could not relate to the suffering he endured or understand the significance of his accounts—until now.
Author(s): Marilyn Shimon

The Holocaust: A History of the Jews of Europe During the Second World War (1987)

Deftly weaving together historical research and survivors’ testimonies, The Holcaust is Gilbert’s acclaimed and definitive history of the European Jews, fom Hitler’s rise to power to Germany’s surrender to the liberation of the prisoners of the concentration camps.
Author(s): Martin Gilbert

The Holocaust: Readings and Interpretations (Textbook) (2001) 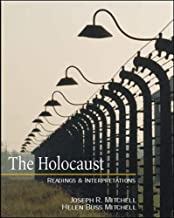 Raises questions related to the study of the Holocaust, and offers answers to these questions through interpretive essays. This book emphasizes the complexity of the subject, while it seeks to provide an understanding of this historical event.
Author(s): Joseph R Mitchell

War and Genocide: A Concise History of the Holocaust (Critical Issues in World and International History) (2016)

In examining one of the defining events of the twentieth century, Doris L. Bergen situates the Holocaust in its historical, political, social, cultural, and military contexts. Unlike many other treatments of the Holocaust, this revised, third edition discusses not only the persecution of the Jews, but also other segments of society victimized by the Nazis: Roma, homosexuals, Poles, Soviet POWs, the disabled, and other groups deemed undesirable.
Author(s): Doris L. Bergen

We Are Witnesses: Five Diaries Of Teenagers Who Died In The Holocaust (2009)

The five diarists in this book did not survive the war. But their words did. Each diary reveals one voice, one teenager coping with the impossible. We see David Rubinowicz struggling against fear and terror. Yitzhak Rudashevski shows us how Jews clung to culture, to learning, and to hope, until there was no hope at all. Moshe Ze’ev Flinker is the voice of religion, constantly seeking answers from God for relentless tragedy.
Author(s): Jacob Boas

Maybe You Will Survive: A Holocaust Memoir (2018)

The author recounts his experiences in Poland during the Holocaust, when he escaped from a forced labor camp and, with his brother, hid in underground holes on the grounds of an estate controlled by the Gestapo. currently lives a quiet, simple life. With good reason, he is quite proud of his achievements, and those of his sons. He and Ester have five grandchildren whom they love dearly.
Author(s): Aron Goldfarb, Graham Diamond

We highly recommend you to buy all paper or e-books in a legal way, for example, on Amazon. But sometimes it might be a need to dig deeper beyond the shiny book cover. Before making a purchase, you can visit resources like Library Genesis and download some holocaust books mentioned below at your own risk. Once again, we do not host any illegal or copyrighted files, but simply give our visitors a choice and hope they will make a wise decision.

A Train Near Magdeburg: A Teacher’s Journey into the Holocaust, and the reuniting of the survivors and liberators, 70 years on

The Girl in the Cellar: Surviving the Holocaust in Nazi-Occupied Poland

Politics, Violence, Memory: The New Social Science of the Holocaust

Please note that this booklist is not errorless. Some books are absolutely chart-busters according to Chicago Tribune, others are written by unknown writers. On top of that, you can always find additional tutorials and courses on Coursera, Udemy or edX, for example. Are there any other relevant links you could recommend? Drop a comment if you have any feedback on the list.