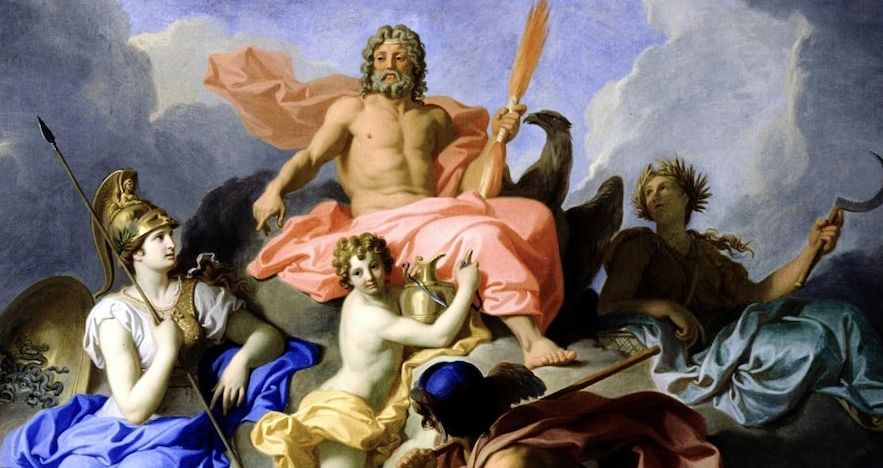 Until you’ve consumed all of the best Greek Mythology books, can you even claim to be a true fan?

Edith Hamilton’s mythology succeeds like no other book in bringing to life for the modern reader the Greek, Roman and Norse myths that are the keystone of Western culture-the stories of gods and heroes that have inspired human creativity from antiquity to the present.We follow the drama of the Trojan War and the wanderings of Odysseus.
Author(s): Edith Hamilton

“I doubt I would have grown up to be the writer and artist I became had I not fallen in love with D’Aulaire’s Book of Greek Myths at the age of seven.”—R. J. Palacio, author of Wonder. In print for over fifty years, D’Aulaires Book of Greek Myths has introduced generations to Greek mythology—and continues to enthrall young readers.
Author(s): Ingri d’Aulaire, Edgar Parin d’Aulaire

By Zeus, it’s Athena, Hera, Hades, Poseidon, and Aphrodite! This sturdy boxed set includes paperback editions of the first six Olympians books by multiple New York Times–bestselling author/illustrator George O’Connor. Holy Hera, it’s got a free poster! Collectors will adore this package, with lots of new artwork and the complete Olympians family tree on the free poster. Plus, the boxed set is also a great way for classrooms to get all six books at once. Aphrodite Almighty, what a value!
Author(s): George O’Connor

The only work of its kind to survive from classical antiquity, the Library of Apollodorus is a unique guide to Greek mythology, from the origins of the universe to the Trojan War.Apollodorus’ Library has been used as a source book by classicists from the time of its compilation in the 1st-2nd century BC to the present, influencing writ…
Author(s): Apollodorus, Robin Hard

A publisher in New York asked me to write down what I know about the Greek gods, and I was like, Can we do this anonymously? Because I don’t need the Olympians mad at me again. But if it helps you to know your Greek gods, and survive an encounter with them if they ever show up in your face, then I guess writing all this down will be my good deed for the week. So begins Percy Jackson’s Greek Gods, in which the son of Poseidon adds his own magic–and sarcastic asides–to the classics.
Author(s): Rick Riordan, John Rocco

It can be challenging to find a comprehensive collection of Greek myths considering the number of versions and translations available. However, look no further as you have found a book that includes many of the most popular Greek myths in an easily accessible format.
Author(s): Matt Clayton

From the creation of the world out of Chaos and the birth of the Olympians to the Trojan War and Odysseus’s return, Robert Graves’s superb retelling of the Greek myths has long been acclaimed as the definitive edition. Graves draws on sources scattered throughout ancient literature, using a novelist’s skill to weave a crisp, coherent narrative of each myth and providing commentaries with cross-references, interpretations, and explanations based on solid scholarship.
Author(s): Robert Graves , Ross Macdonald, et al.

All five books in the blockbuster Percy Jackson and the Olympians series, in paperback, have been collected in a boxed set fit for demigods. Now with glorious new cover art and packaged with a special poster, this value-priced set includes the best-selling The Lightning Thief, The Sea of Monsters, The Titan’s Curse, The Battle of the Labyrinth, and The Last Olympian.
Author(s): Rick Riordan, John Rocco

Mythology is not about the past. The past is what’s behind us and that’s not where mythology really exists. The big daddy of mythology hails from ancient Greece―and whether we realize it or not, Greek mythology influences the western world of today. If you have ever seen the Atlantic Ocean, if you love the wonders of stargazing, if you’ve dreamed of being in the Olympics, or made reference to Pandora’s Box―then you have been influenced by Greek mythology.
Author(s): Jason Boyett

The broad arc of the first manuscript takes us from the dim beginnings of creation as seen in the Greek mythology.
Author(s): Matt Clayton

Best Greek Mythology Books that Should be on Your Bookshelf

We highly recommend you to buy all paper or e-books in a legal way, for example, on Amazon. But sometimes it might be a need to dig deeper beyond the shiny book cover. Before making a purchase, you can visit resources like Library Genesis and download some greek mythology books mentioned below at your own risk. Once again, we do not host any illegal or copyrighted files, but simply give our visitors a choice and hope they will make a wise decision.

Introduction to Greek Mythology for Kids: A Fun Collection of the Best Heroes, Monsters, and Gods in Greek Myth

Please note that this booklist is not final. Some books are absolutely chart-busters according to Chicago Tribune, others are written by unknown writers. On top of that, you can always find additional tutorials and courses on Coursera, Udemy or edX, for example. Are there any other relevant resources you could recommend? Drop a comment if you have any feedback on the list.