Skip to content
BLGM's mission is to promote a love of books and reading to all by offering advice and information needed to help our visitors to find their next favorite book. We regularly create and post so-called listicles (also known as booklists) on various mostly tech-related topics.
Home » Reviews
Author BLGMReading 9 minViews 525Published by February 5, 2019

Looking for the best Geopolitics books? Browse our list to find excellent book recommendations on the subject.

1. Prisoners of Geography: Ten Maps That Explain Everything About the World (1) (Politics of Place) (2016)

In this New York Times bestseller, an award-winning journalist uses ten maps of crucial regions to explain the geo-political strategies of the world powers—“fans of geography, history, and politics (and maps) will be enthralled” (Fort Worth Star-Telegram).Maps have a mysterious hold over us. Whether ancient, crumbling parchments or generated by Google, maps tell us things we want to know, not only about our current location or where we are going but about the world in general. And yet, when it comes to geo-politics, much of what we are told is generated by analysts and other…
Author(s): Tim Marshall

2. Geopolitics: The Geography of International Relations (2014) 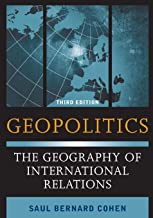 Written by one of the world's leading political geographers, this fully revised and updated textbook examines the dramatic changes wrought by ideological, economic, socio-cultural and demographic changes unleashed since the end of the Cold War. Saul Cohen considers these forces in the context of their human and physical settings, and explores their geographical influence on foreign policy and international relations….
Author(s): . Cohen 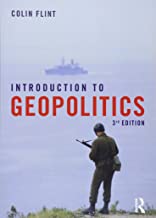 This new updated edition of Introduction to Geopolitics presents the overarching themes of geopolitical structures and agents in an engaging and accessible manner, which requires no previous knowledge of theory or current affairs. Using new pertinent case studies and guided exercises the title explains the contemporary global power of the United States and the challenges it is facing, the persistence of nationalist conflicts, migration, cyberwar, terrorism, and environmental geopolitics. Case studies of the rise of the so-called Islamic State, the South…
Author(s): Colin Flint

4. War by Other Means: Geoeconomics and Statecraft (2017)

A Foreign Affairs Best Book of 2016Today, nations increasingly carry out geopolitical combat through economic means. Policies governing everything from trade and investment to energy and exchange rates are wielded as tools to win diplomatic allies, punish adversaries, and coerce those in between. Not so in the United States, however. America still too often reaches for the gun over the purse to advance its interests abroad. The result is a playing field sharply tilting against the United States.“Geoeconomics, the use of economic instruments to…
Author(s): Ambassador Robert D. Blackwill, Jennifer M. Harris

5. The Accidental Superpower: The Next Generation of American Preeminence and the Coming Global Disorder (2016)

In the bestselling tradition of The World Is Flat and The Next 100 Years, THE ACCIDENTAL SUPERPOWER will be a much discussed, contrarian, and eye-opening assessment of American power. Near the end of the Second World War, the United States made a bold strategic gambit that rewired the international system. Empires were abolished and replaced by a global arrangement enforced by the U.S. Navy. With all the world’s oceans safe for the first time in history, markets and resources were made available for everyone. Enemies became partners. We think of this system as normal-it is not. We live in an artificial world on borrowed…
Author(s): Peter Zeihan

Henry Kissinger offers in World Order a deep meditation on the roots of international harmony and global disorder. Drawing on his experience as one of the foremost statesmen of the modern era—advising presidents, traveling the world, observing and shaping the central foreign policy events of recent decades—Kissinger now reveals his analysis of the ultimate challenge for the twenty-first century: how to build a shared international order in a world of divergent historical perspectives, violent conflict, proliferating…
Author(s): Henry Kissinger

7. The Revenge of Geography: What the Map Tells Us About Coming Conflicts and the Battle Against Fate (2013)

Bestselling author Robert D. Kaplan builds on the insights, discoveries, and theories of great geographers and geopolitical thinkers of the recent and distant past to look back at critical pivots in history and then to look forward at the evolving global scene. Kaplan traces the history of the world’s hot spots by examining their climates, topographies, and proximities to other embattled lands. He then applies the lessons learned to the present crises in Europe, Russia, China, the Indian Subcontinent, Turkey, Iran, and the Arab Middle East. The…
Author(s): Robert D. Kaplan

Far more than a history of the Silk Roads, this book is truly a revelatory new history of the world, promising to destabilize notions of where we come from and where we are headed next. From the Middle East and its political instability to China and its economic rise, the vast region stretching eastward from the Balkans across the steppe and South Asia has been thrust into the global spotlight in recent years. Frankopan teaches us that to understand what is at stake for the cities and nations built on these intricate trade routes, we must first understand their astounding pasts.  Frankopan…
Author(s): Peter Frankopan

Jairus Victor Grove contends that we live in a world made by war. In Savage Ecology he offers an ecological theory of geopolitics that argues that contemporary global crises are better understood when considered within the larger history of international politics. Infusing international relations with the theoretical interventions of fields ranging from new materialism to political theory, Grove shows how political violence is the principal force behind climate change, mass extinction, slavery, genocide, extractive capitalism, and other catastrophes….
Author(s): Jairus Victor Grove

10. Is This the End of the Liberal International Order?: The Munk Debates (2017)

Be it resolved, the liberal international order is over…Since the end of World War II, global affairs have been shaped by three broad trends: the increasing free movement of people and goods, international rules setting, and a broad appreciation of the mutual benefits of a more interconnected, interdependent world. Together these factors defined the liberal international order and sustained an era of rising global prosperity and declining international conflict. But is this order now being supplanted by a new global reality; one defined by the…
Author(s): Niall Ferguson, Fareed Zakaria, et al.

11. Democratic Ideals and Reality / The Geographical Pivot of History (2018)

On January 25, 1904, Halford Mackinder read to the Royal Geographical Society an article titled “The Geographical Pivot of History” and proposed his Heartland theory. With this article, Mackinder created the modern field of geopolitics. Mackinder’s theory was later developed further in his book Democratic Ideals and Reality: A Study in the Politics of Reconstruction in which he demonstrated prescience by predicting that the Great War will be followed by another great struggle for the dominance of the Heartland.His Heartland theory has since become one of the foundational theories of geopolitics and continues…
Author(s): Halford Mackinder

12. Prisoners of Geography: Ten Maps That Tell You Everything You Need to Know About Global Politics (2016)

History and geography delineate the operation of power, not only its range but also the capacity to plan and the ability to implement. Approaching state strategy and policy from the spatial angle, Jeremy Black argues that just as the perception of power is central to issues of power, so place, and its constraints and relationships, is partly a matter of perception, not merely map coordinates. Geopolitics, he maintains, is as much about ideas and perception as it is about the actual spatial dimensions of power. Black’s study ranges widely, examining geography and the…
Author(s): Jeremy Black

Best Geopolitics Books You Should Read

We highly recommend you to buy all paper or e-books in a legal way, for example, on Amazon. But sometimes it might be a need to dig deeper beyond the shiny book cover. Before making a purchase, you can visit resources like Genesis and download some geopolitics books mentioned below at your own risk. Once again, we do not host any illegal or copyrighted files, but simply give our visitors a choice and hope they will make a wise decision.

The Dynamics Of Russia’s Geopolitics: Remaking The Global Order

Confucian Geopolitics: Chinese Geopolitical Imaginations Of The US War On Terror

Please note that this booklist is not final. Some books are really best-sellers according to The Wall Street Journal, others are written by unknown writers. On top of that, you can always find additional tutorials and courses on Coursera, Udemy or edX, for example. Are there any other relevant resources you could recommend? Drop a comment if you have any feedback on the list.