Skip to content
📚 Book Lovin' Geek Mamas are on a mission to promote a love of books and reading to everyone. We help our visitors to find their next favorite book. Our authors regularly create and post so-called listicles (also known as booklists) on various mostly tech-related topics.
Home » Reviews
Author BLGMReading 7 minViews 1.2k.Published by August 5, 2019

Here is a list of the best Discworld books, some I have read myself, some that I did research on, and all have great reviews!

The beginning of the hilarious and irreverent series that has more than 80 million copies worldwide, The Color of Magic is where we meet tourist Twoflower and wizard guide Ricewind, and follow them on their always-bizarre journeys.A writer who has been compared to Mark Twain, Kurt Vonnegut, and Douglas Adams, Sir Terry Pratchett has created a complex, yet zany world filled with a host of unforgettable characters who navigate around a profound fantasy universe, complete with its own set of cultur…
Author(s): Terry Pratchett 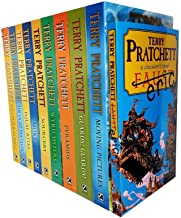 The side-splitting sequel to The Color of Magic, The Light Fantastic by New York Times bestselling author Sir Terry Pratchett takes readers on another offbeat journey with bumbling wizard Rincewind and hapless tourist Twoflower—both last seen falling off the edge of Discworld.The fate of Pratchett’s alternative fantasy macrocosm are in the bumbling duo’s hands as it hurtles its way toward a foreboding red star, threatening the fate of the entire universe. Sharp, sardonic,…
Author(s): Terry Pratchett

New York Times bestselling author Sir Terry Pratchett makes Death a central character in Mort, his fourth sojourn to Discworld, the fantasy cosmos where even the angel of darkness needs some assistance. When inept, but well-intentioned Mort gets only one offer for an apprenticeship—with Death—he can’t exactly turn it down.
Author(s): Terry Pratchett

In Equal Rites, New York Times bestselling author Terry Pratchett brings readers back to Discworld, a fantasy universe where anything can happen—and usually does.A dying wizard tries to pass his staff on to the eighth son of an eighth son.
Author(s): Terry Pratchett

Suddenly, condemned arch-swindler Moist von Lipwig found himself with a noose around his neck and dropping through a trapdoor into . . . a government job?By all rights, Moist should be meeting his maker rather than being offered a position as Postmaster by Lord Vetinari, supreme ruler of Ankh-Morpork.
Author(s): Terry Pratchett

Sourcery, a hilarious mix of magic, mayhem, and Luggage, is the fifth book in Terry Pratchett's classic fantasy Discworld series.Rincewind, the legendarily inept wizard, has returned after falling off the edge of the world. And this time, he’s brought the Luggage. But that’s not all… Once upon a time, there was an eighth son of an eighth son who was, of course, a wizard.
Author(s): Terry Pratchett

Not just another science book and not just another Discworld novella, The Science of Discworld is a creative, mind-bending mash-up of fiction and fact, that offers a wizard’s-eye view of our world that will forever change how you look at the universe.Can Unseen University’s eccentric wizards and orangutan Librarian possibly shed any useful light on hard, rational Earthly science?    In…
Author(s): Terry Pratchett , Ian Stewart , et al.

Welcome to Guards! Guards!, the eighth book in Terry Pratchett’s legendary Discworld series.Long believed extinct, a superb specimen of draco nobilis ("noble dragon" for those who don't understand italics) has appeared in Discworld's greatest city. Not only does this unwelcome visitor have a nasty habit of charbroiling everything in its path, in rather short order it is crowned King (it is a noble dragon, after all). How did it get there?
Author(s): Terry Pratchett

By the author of The Streets of Ankh-Morpork and The Discworld Companion, this pack contains a detailed color map of the Discworld, plus a booklet with lots of wacky facts and figures.
Author(s): Terry Pratchett, Stephen Briggs

The Folklore of Discworld: Legends, Myths, and Customs from the Discworld with Helpful Hints from Planet Earth (2014)

– Legends, myths, fairytales, superstitions. Our world is full of the stories we have told ourselves about where we came from and how we got there. It is the same on Discworld, except that beings such as vampires, trolls, golems, witches and, possibly, gods, which on Earth are creatures of the imagination, are real, alive, and in some cases kicking on the Disc.
Author(s): Terry Pratchett, Jacqueline Simpson

Time itself is threatened— and it's up to the History Monks to save it in Terry Pratchett's bestselling Discworld® seriesEverybody wants more time.
Author(s): Terry Pratchett

The Last Continent: A Novel of Discworld (2014)

Terry Pratchett’s fantasy classic Wyrd Sisters, a novel in the Discworld series, is the story of Granny Weatherwax, the most highly regarded non-leader a coven of non-social witches could ever have.Generally, these loners don’t get involved in anything, mush less royal intrigue. but then there are those times they can’t help it. As Granny Weatherwax is about to discover, though, it’s a lot harder to stir up trouble in the castle than some theatrical types would have you think.
Author(s): Terry Pratchett

Pyramids is the seventh book in the award-winning comic fantasy Discworld series by Terry Pratchett.In Pyramids, you'll discover the tale of Teppic, a student at the Assassin’s Guild of Ankh-Morpok and prince of the tiny kingdom of Djelibeybi, thrust into the role of pharaoh after his father’s sudden death. It's bad enough being new on the job, but Teppic hasn't a clue as to what a pharaoh is supposed to do.
Author(s): Terry Pratchett

We highly recommend you to buy all paper or e-books in a legal way, for example, on Amazon. But sometimes it might be a need to dig deeper beyond the shiny book cover. Before making a purchase, you can visit resources like Library Genesis and download some discworld books mentioned below at your own risk. Once again, we do not host any illegal or copyrighted files, but simply give our visitors a choice and hope they will make a wise decision.

The Science of Discworld

Please note that this booklist is not errorless. Some books are really record-breakers according to The Wall Street Journal, others are written by unknown authors. On top of that, you can always find additional tutorials and courses on Coursera, Udemy or edX, for example. Are there any other relevant books you could recommend? Leave a comment if you have any feedback on the list.