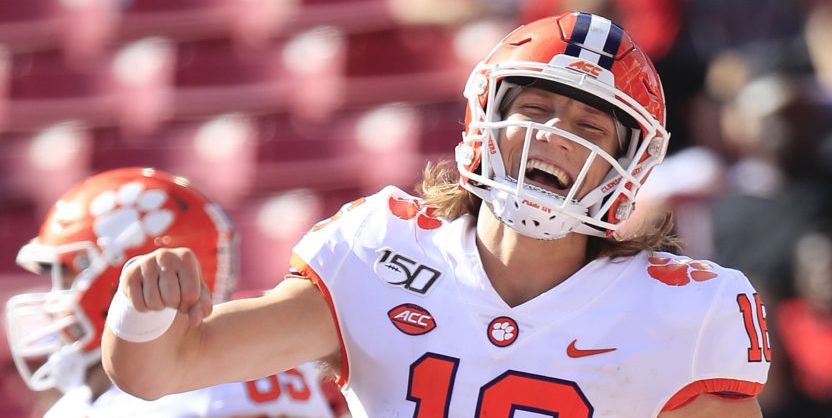 Until you’ve consumed all of the best College Football books, can you even claim to be a true fan?

Football Outsiders Almanac 2019: The Essential Guide to the 2019 NFL and College Football Seasons (2019)

The most authoritative and innovative annual guide to both the NFL and college football is back for an all-new season with more cutting-edge statistical analysis, obsessive film study, and trademark humor.
Author(s): Aaron Schatz, Thomas Bassinger, et al.

College football’s history is rich and regionalized. You know your team’s history and maybe your conference’s, but our shared knowledge doesn’t go too far beyond Heisman winners and recent national champions. It’s time to change that. In The 50 Best* College Football Teams of All Time, Bill Connelly dives into the history and evolution of the sport, telling its story through 50 particularly interesting teams.
Author(s): Bill Connelly

The System: The Glory and Scandal of Big-Time College Football (2014)

A Shelf Awareness Best Book of the Year NCAA football is big business. Every Saturday millions of people file into massive stadiums or tune in on television as “athlete-students” give everything they’ve got to make their team a success. Billions of dollars now flow into the game. But what is the true cost? The players have no share in the oceans of money. And once the lights go down, the glitter doesn’t shine so brightly.
Author(s): Jeff Benedict, Armen Keteyian

“In March [1892] Stanford and California had played the first college football game on the Pacific Coast in San Francisco The pregame activities included a noisy parade down streets bedecked with school colors.
Author(s): John Sayle Watterson

Season of Saturdays: A History of College Football in 14 Games (2015)

From an award-winning sports journalist and college football expert: “A beautifully written mix of memoir and reportage that tracks college ball through fourteen key games, giving depth and meaning to all” (Sports Illustrated), now with a new Afterword about the first ever College Football Playoff.Every Saturday in the fall, it happens: On college campuses, in bars, at gatherings of fervent alumni, millions come together to watch a sport that inspires a uniquely American brand of

When the Lions Roared: Joe Paterno and One of College Football’s Greatest Teams (2017)

The 1982 Penn State national championship team was not only one of Joe Paterno’s best, it was one of the best teams college football has ever seen. In When the Lions Roared, Bill Contz, one of the squad's offensive linemen, details that special season and the experience of playing for a legendary coach.
Author(s): Bill Contz, Todd Blackledge

“The FBS covers 129 colleges which are divided between 10 conferences. But incredibly, only 3% of FBS programs qualify for the playoffs. The NFL has just 32 teams, and it qualifies 12 teams for its playoffs (37%). The NBA and the NHL qualify 53% of their teams for the playoff. Major League Baseball qualifies 26% of its teams for its playoff.
Author(s): Sergei Chevtsov, Alan Navarre , et al.

Billion-Dollar Ball: A Journey Through the Big-Money Culture of College Football (2016)

Best College Football Books That Will Hook You

We highly recommend you to buy all paper or e-books in a legal way, for example, on Amazon. But sometimes it might be a need to dig deeper beyond the shiny book cover. Before making a purchase, you can visit resources like Library Genesis and download some college football books mentioned below at your own risk. Once again, we do not host any illegal or copyrighted files, but simply give our visitors a choice and hope they will make a wise decision.

The Hot Seat: A Year of Outrage, Pride, and Occasional Games of College Football

Five Laterals and a Trombone: Cal, Stanford, and the Wildest Finish in College Football History

Out of the Pocket: Football, Fatherhood, and College GameDay Saturdays

Please note that this booklist is not absolute. Some books are truly record-breakers according to Chicago Tribune, others are written by unknown writers. On top of that, you can always find additional tutorials and courses on Coursera, Udemy or edX, for example. Are there any other relevant books you could recommend? Drop a comment if you have any feedback on the list.