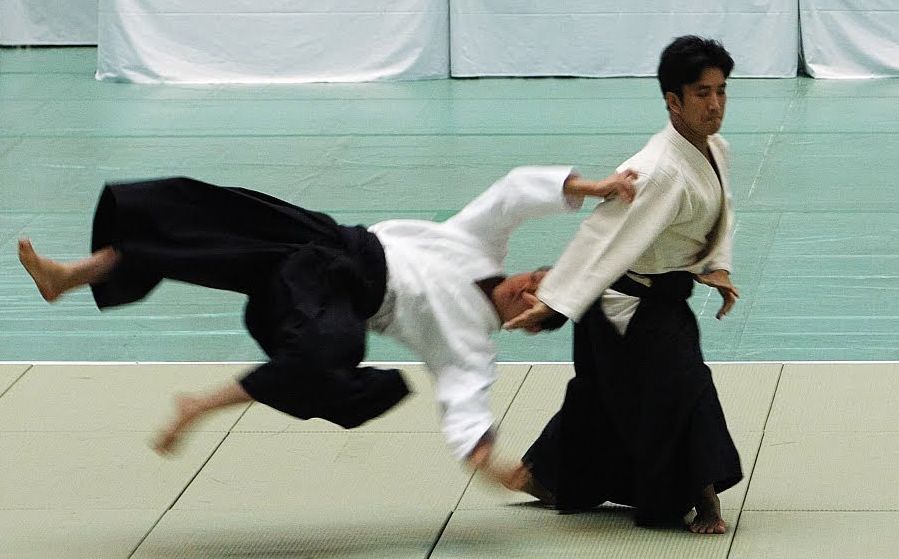 Until you’ve consumed all of the best Aikido books, can you even claim to be a true fan?

The Art of Peace: Teachings of the Founder of Aikido (1992)

These inspirational teachings show that the real way of the warrior is based on compassion, wisdom, fearlessness, and love of nature. Drawn from the talks and writings of Morihei Ueshiba, founder of the popular Japanese martial art known as Aikido, The Art of Peace, presented here in a pocket-sized edition, offers a nonviolent way to victory and a convincing counterpoint to such classics as Musashi’s Book of Five Rings and Sun Tzu’s Art of War.
Author(s): Morihei Ueshiba, John Stevens

Aikido Basics: Everything you need to get started in Aikido – from basic footwork and throws to training (Tuttle Martial Arts Basics) (2018)

Are you ready to learn aikido, but don’t know where to begin? Are you intimidated by the unfamiliar terms or the powerful aikido techniques? With Aikido Basics you’ll become an expert in this Japanese martial art in no time! Whether you are considering taking up this martial art, or you’ve already started, this aikido book offers an easy, yet comprehensive introduction to everything you need to know to feel confident and be successful.
Author(s): Phong Thong Dang

Aikido was created in Japan in the 1920’s by Morihei Ueshiba, also known as Osensei. To possess the skills, techniques and attitude of the faithful practitioner of aikido, one must achieve a very high level of integration of the powers of mind and body, the harmonious combination of physical means and ethical motives.
Author(s): Adele Westbrook, Oscar Ratti

Aikido in Japan and The Way Less Traveled (2014)

As the sign in the martial arts school changing room in Los Angeles read, “Not even a million dollars can buy back one minute of your life”. W.T.
Author(s): W T Gillespie

Aikido: An Everyday Approach To The Martial Art That Can Transform Your Life & The World (2016)

An everyday approach to understanding and using the core principles of the martial art Aikido written by a teacher and student of Aikido for over twenty years. The book is fun to read and the exercises can done during the course of one’s everyday activities.
Author(s): Paul Frederick Rest

The Language of Aikido: A Practitioner’s Guide to Japanese Characters and Terminology (2017)

Researched and written by a professional linguist with decades of experience as a student of Japanese language, culture, and martial arts–including living and training in Japan for 10 years–"The Languageof Aikido: A Practitioner's Guide to Japanese Characters and Terminology" was designed specifically for students and teachers of the Japanese martial art Aikido, but will also be of interest to Japanese language enthusiasts who practice other martial arts such as Karate, Judo, Ju…
Author(s): Michael Hacker

Aiki is the power of harmony, of all beings, all things working together.Aikido–a modern Japanese martial art unique in its synthesis of classic forms with a well-defined spiritual base–offers a key to the art of living naturally and unselfishly in a complicated world.
Author(s): Kisshomaru Ueshiba

Do you want to have the edge in your ground grappling skills? Would you like to add a new, effective and unique approach to your ground defense techniques that the competition is missing? Then look inside to read more about the power of the Mukei No Ryu aikido-newaza system. “Aikido’s Hidden Ground Techniques” has hundreds of descriptive photos including a rare photo of O’Sensei, as well as strategies and insights into ground grappling for the street.
Author(s): Dr. Jose Andrade, David B. Nemeroff

The Spiritual Foundations of Aikido (1995)

Morihei Ueshiba, who founded Aikido early in this century, intended that his martial art would give form to profound spiritual truth, and lead to a unification of the world’s peoples. He saw Aikido not as a fighting method or as a competitive sport but rather as a means of becoming one with the laws of universal order–ki, or life energy.
Author(s): William Gleason

Budo: Teachings of the Founder of Aikido (2013)

Morihei Ueshiba is rightly known as one of the world’s greatest martial artists for his creation of aikido, the synthesis of his superb technique and his profound spiritual insight into the nature of the universe.
Author(s): Morihei Ueshiba, Kisshomaru Ueshiba

Best Aikido Books That You Need

We highly recommend you to buy all paper or e-books in a legal way, for example, on Amazon. But sometimes it might be a need to dig deeper beyond the shiny book cover. Before making a purchase, you can visit resources like Library Genesis and download some aikido books mentioned below at your own risk. Once again, we do not host any illegal or copyrighted files, but simply give our visitors a choice and hope they will make a wise decision.

Aikido as Transformative and Embodied Pedagogy: Teacher as Healer

Aikido Off the Mat: One Woman's Journey Using Aikido Principles to Stay Sane in Body, Mind, and Spirit

The Mushin Way How the Power, Clarity and Mindfulness of Aikido Can Bring Success in Business and Life

Please note that this booklist is not final. Some books are absolutely hot items according to USA Today, others are written by unknown authors. On top of that, you can always find additional tutorials and courses on Coursera, Udemy or edX, for example. Are there any other relevant resources you could recommend? Leave a comment if you have any feedback on the list.